You Can't Take It With You

Last weekend, Thin Ice Theater presented the Moss Hart - George S. Kaufman classic "You Can't Take It With You".  Comedy ensues when the the straight-laced Kirby family meets the eccentric Sycamore family.  There is also a lovely message about living and enjoying life to the fullest.

One goal of the costuming was to clearly express the difference between the two families.  The Kirby's are neatly pressed and dress in subdued colors, hair expertly coiffed.  The Sycamore's are a bit wrinkly, their hair a bit mussed, and their clothes much more colorful.  Their friends each have a unique look that reflects their stories and personalities.  Our director Eileen set us the goal that the audience should laugh when each walked on stage, before any words were spoken.  And at the same time, we tried to avoid making anyone overly charicature-ish or clownish.  The play is set in the late 1930s.

Here is the family and their guests around the dinner table: 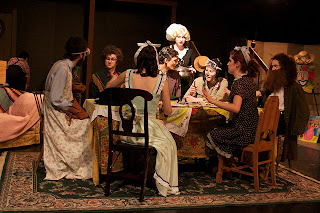 Here are Mr. DePinna and Paul, in the clothes they wear while making fireworks in the basement.  Mostly, this gave us the opportunity to pull out a few of the wackiest things we have.  These guys were such a good sports about it, and actually got excited every time we gave them something else outlandish to put on.  Paul is wearing one of the dusters that was made for Little Women last fall. 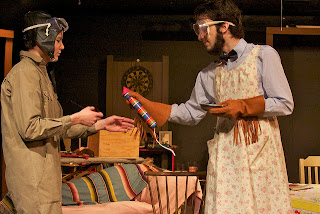 We dressed Donald quite casually, since as he says, he "don't go nowhere much".  And then added a crumpled fisherman's hat and cowboy boots.  Eileen's direction was for Penny to be a Lucille Ball type character.  Penny's theme became polka dots, to bring out her endearingly ditzy personality. 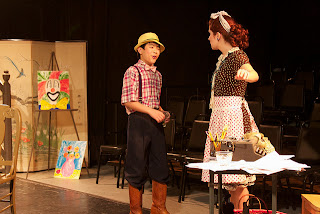 Below on the left is Essie. She dreams of being a dancer (and our actress has taken loads of ballet).  Eileen asked her to be an innocent, with a dark intensity that surfaces now and then.  All her costumes had to have full skirts and petticoats for lots of twirling.  Her husband, Ed, was to be basically geeky.

To their right is Grandpa, the anchor for the whole family, and the source of the philosophy of the play.  We decided to keep him dressed pretty conventionally, a dapper old gent.  But he's not totally pulled together, doesn't have a complete suit even though we do have the pants that go with that jacket.

And on the right is Henderson, the tax man, getting agitated trying to explain to Grandpa why he must pay his back taxes. 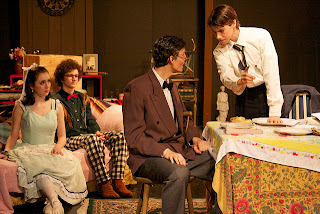 Next, here is Rheba the maid.  She's a sweet, gum-popping blonde.  We found a great wig for her.  To make her basic maid costume more fun, we pulled out all the aprons we have, and she wore a different one for each entrance.

She is talking to Tony and Alice, the romantic link that brings these two unlikely families together.  They are dressed in their finest as they go off to see the Monte Carlo Ballet. 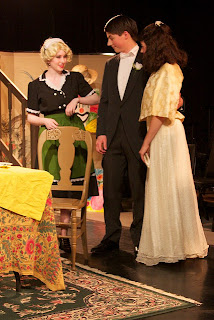 Then, Mr. DePinna puts on his Roman costume, modeling for Penny's artwork, while Penny is wearing her "painter clothes".  The Roman tunic is one of the few things we made from scratch.  We had the helmet in our costume collection.  After this photo was taken, we got some taller socks and he wore them with sock garters.  That was something I saw while looking at photos of other productions, and I really liked it.

In the background, you can see Essie coming downstairs in what I like to call her ballerina-wannabee costume.  It was a pink dotted Swiss petticoat that was restructured a bit, a white silk camisole-style blouse added, and then both embellished with pink lace and ribbon bows. 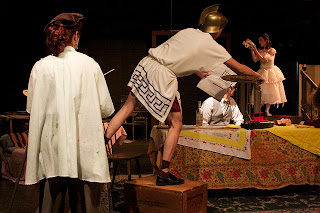 Here's the fateful moment when the Kirby's arrive for dinner.  I picked a red tie for the son, Tony, to give him a bit more liveliness than his father.  For me, the tie symbolizes that Tony is drawn to the wackiness of this family. 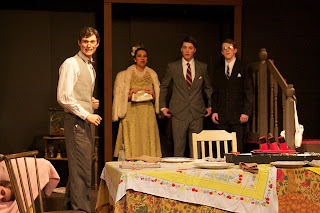 And here's Ed talking to one of the three G-men.  The G-men all wore basic black suits and fedoras and white shirts. 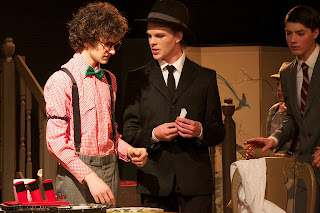 Here are two friends of the family.  The Grand Duchess Olga Katrina and Mr. Kolenkhov.  The Duchess is on break from her waitresses job at Child's Restaurant.  Eileen wanted her to be wearing a strange combination of duchess finery and her waitress uniform.  I researched fancy waitress uniforms of the day, and found a photo of this hat.  Annie miraculously reproduced it.  Eileen loved it because it has the look and feel of a tiara.  We inherited her fur wrap a couple of years ago in a box of fur bits and pieces. We left it torn, because she is down on her luck a bit after the Russian Revolution.

Mr. Kolenkhov is Essie's ballet teacher.  We found this huge beard for him that almost exactly matches his hair.  He is an impressario-wannabee.  We dressed him in tail coats, as he is always bemoaning what has become of the grandeur of Russia under the Communist government.  (He is also my son.) 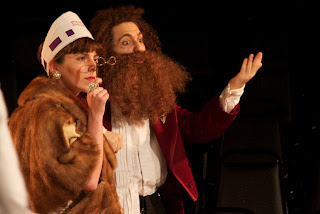 Costume portraits are on my website.  This was a super fun show to costume, since we could break loose a bit and have lots of fun with silly costumes.

Labels: costumes, Thin Ice Theater, You Can't Take It With You