My First Quilt - The Fabrics

Here are some photos of the fabrics in the first quilt I ever made.  You can find the story of making the quilt in the previous post. 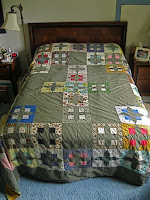 Most of the fabrics are from the 1960s, and some are from the 70s.  Scraps are from clothing my mom and I made, the constant stream of aprons and kitchen curtains my mom made for the south-facing window, and scraps I inherited from a good friend's family scrap pile.

I am reminded of a quilt that a student brought to one of the first quilt classes I ever taught.  It was a simple 9-patch quilt, made in the 1870s or so by a 13-year old girl as I recall.  There was a map of the quilt with details of every fabric - Aunt So-and-So's dress, and so on.  One of the fabrics had this story:  The girl and her sister had been dressed in their brand new best dresses for an event, and then wandered off and did some strawberry picking.  The result, as you might expect, was strawberry juice stains that wouldn't wash out.  The mom made the girl put those stained patches in her quilt, as a reminder of the lesson learned!

My First Quilt - The Story 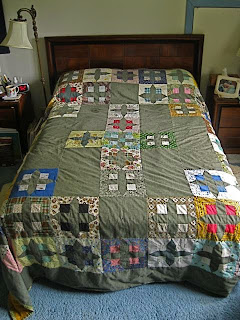 As a child, I learned to sew clothes from my mom.  We kept all the scraps in a cardboard box near the sewing machine on the bottom shelf, and she told me we would make a quilt someday.  She even collected some Aunt Martha quilt pattern pamphlets. 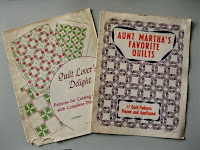 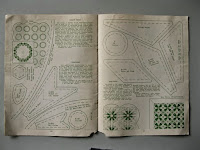 That's as far as she and I ever got, but the "someday" kept echoing in my head.  After college, while doing data entry on a primatology project, I took a little 6-week intro to quilting class.  I made a pillow. I was needing something colorful and handy to entertain myself while "waiting" for the huge "mainframe" computer to return my "output".  Ancient concepts now.  The year was 1978.

I came across this wonderful quilt in my surfing today.

It was made and signed in 1937 by Camille Nixdorf Phelan.  There is a map of the US as it was in 1937: 48 states.  Landmarks and personalities are embroidered in the states.  The map is surrounded by a further 150 portraits of famous people - including Presidents, First Ladies, and herself as quiltmaker, 50 further landmarks, maps of 4 US territories.

Camille was born in 1882 in Missouri, and moved to Oklahoma after her marriage in 1900.  She became famous for her Oklahoma Historical Quilt that was displayed at the 1933 Chicago World's Fair.  Here's a bit about that quilt in her own words (from the Oklahoma Historical Society site, link just previous):

"Twenty 100-yard spools of thread were used.  Every stitch of the embroidering is my own work and I spent all my spare time for four years in actual construction. Two years were spent in research work before I began the quilt."

Shortly after her success with Oklahoma history, she embarked on creating the America quilt.  It was documented, but lost, and finally resurfaced in the 1980s.

A description is at Rare Book Hub.  A further description, bio of the quiltmaker, and detail photos are in a Bidsquare listing, where the quilt was recently sold by Cowan Auctions for $19,200. 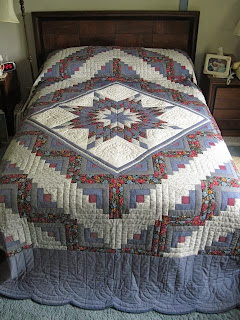 A friend was unexpectedly given this quilt along with some other Freecycle things she was picking up.  And guess who she thought might like to adopt it!

I love the design of this quilt!  The combo of center star, inner borders, log cabin surround, scalloped edge, feathered heart quilting - masterful.  On top of that, the quilt is extremely well-crafted. 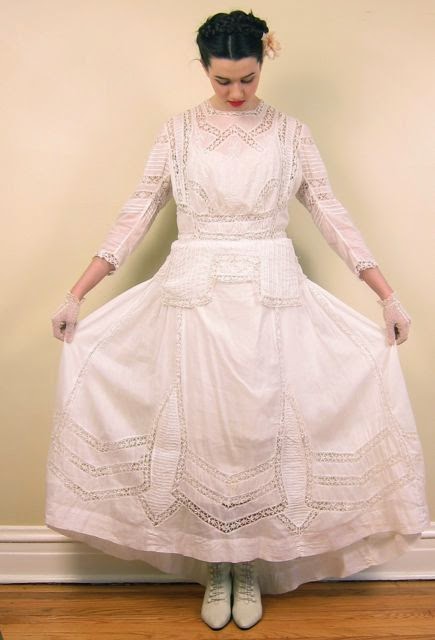 This is a lovely Edwardian dress with loads of lovely lace.  The lace was broken in a few places.  Here's how I repaired it.

Break #1
Petals had broken away from the borders, leaving the flower crumpled and fraying. 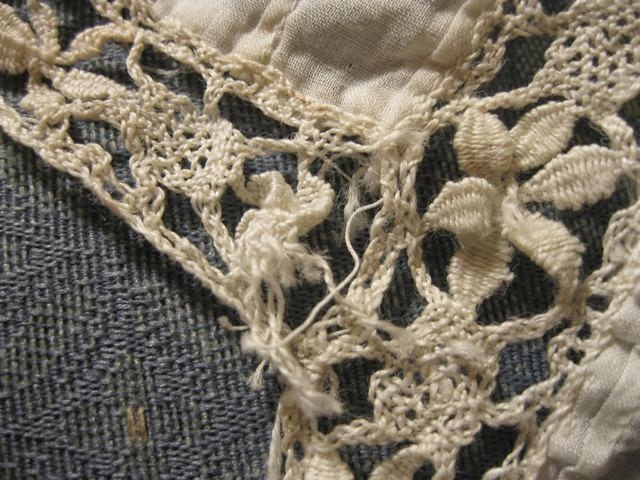 I decided not to cut any of the dangling thread ends, so as avoid risking more unraveling.  I whipstitched the broken thread ends to the remaining lace.

When Mending a Dress is More Like Engineering than Sewing

Here's a photo my vintage clothing friend Julia took of me as I was puzzling out a repair. 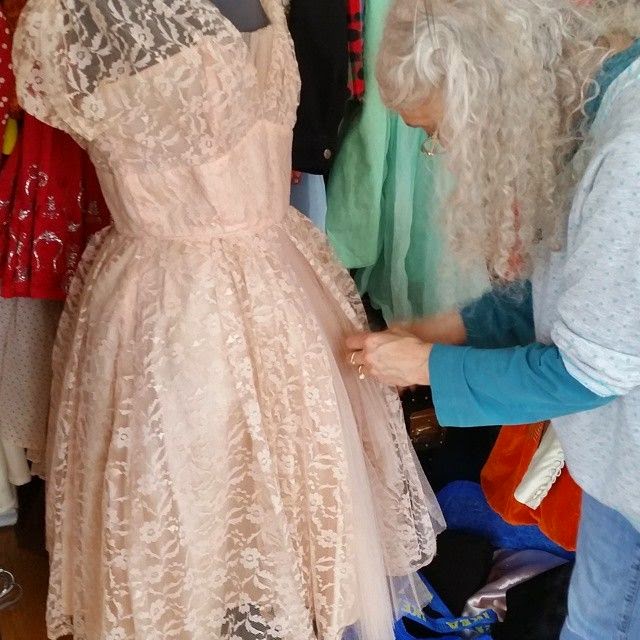 The dress is (more precisely - was, and soon will be again) a perfect 1950s party dress, nearly all lace over satin.  The front panel of pleated netting has a bad rip in it.  Just at this moment I was happily realizing that my idea of where to cut and re-sew was actually going to work!

Some of the repairs I do for Julia are simple - closing seams, restitching hems, etc.  Some, like this one, are real challenges.  I'll post a step-by-step on this one when I get to the sewing.  Just thought I'd post a photo of me, because I hardly ever do.

In this photo, you also get to meet Julia's dress form, our good friend Ethel.