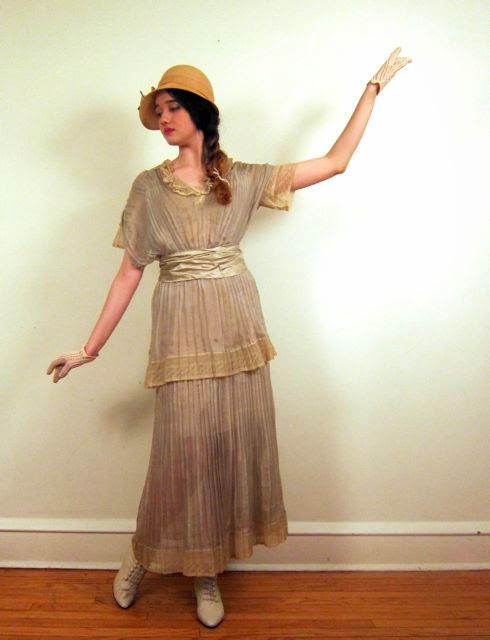 I did a tiny bit of repair work on this lovely, delicate Edwardian dress.  As always, it is fascinating to hold and handle these amazing old pieces, explore the construction details, and marvel at the age and quality of the fabrics and laces.

The Edwardian era is named after King Edward VII of England, who reigned from 1901-1910.  The era generally is extended a bit past his rule, to or through World War I.

This dress exhibits lots of the fashion details of that era -
pale color (often sold with poetic names like "ashes of roses", which I imagine could be this very color)
soft, "wilting" fabrics
layered skirt
pouched bodice
columnar silhouette

Here are a couple of sites about the clothing of this time I found fun:
article - Fashion in the Edwardian Era
vintage fashion photos

This detail shows the pleating of the chiffon, the wonderful lace, and the styling on the sleeve. 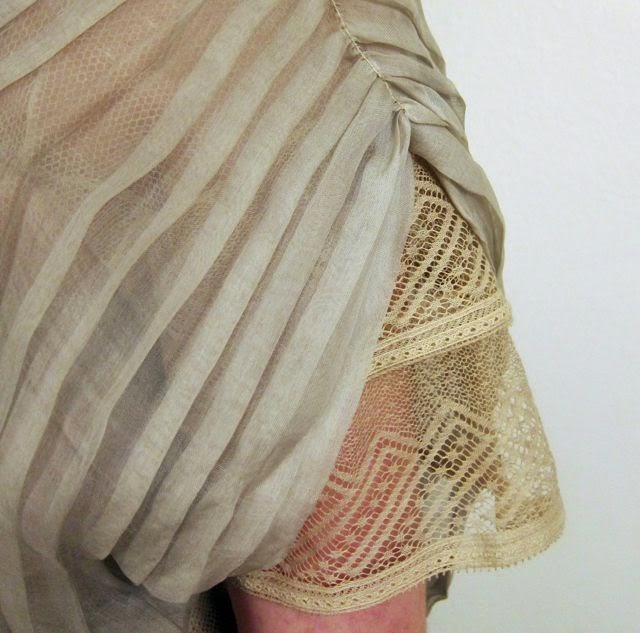 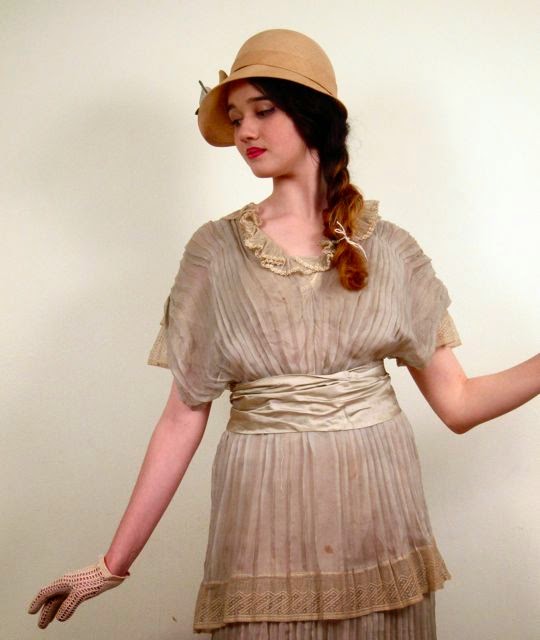 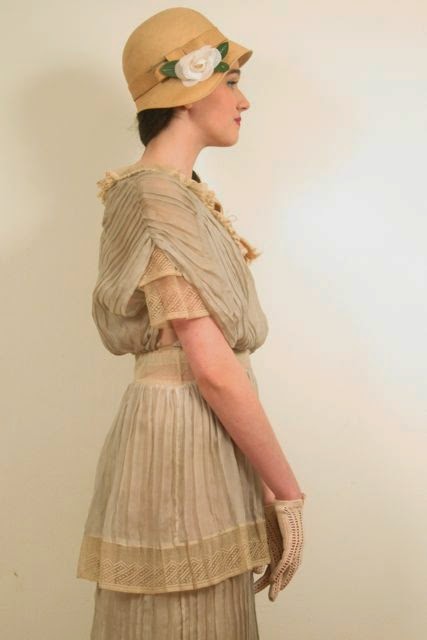 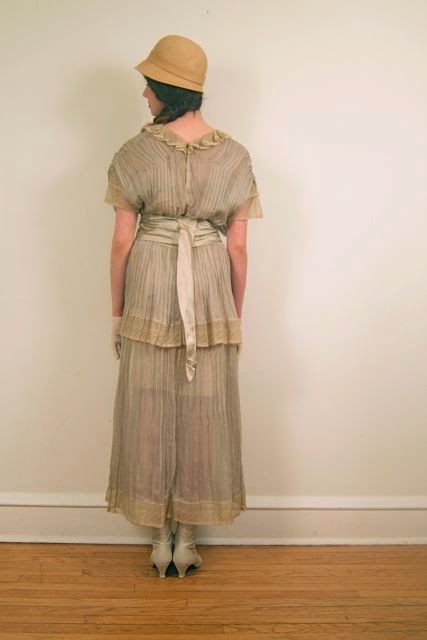 This dress would be right at home for high tea at 165 Eaton Place or Downton Abbey, don't you think?

Read more about it, or even buy it, at Basya Berkman Vintage Fashion, and thank my friend Julia, who rescues these wonderful, wonderful antiques.
Posted by Ann at 10:52 AM 1 comments 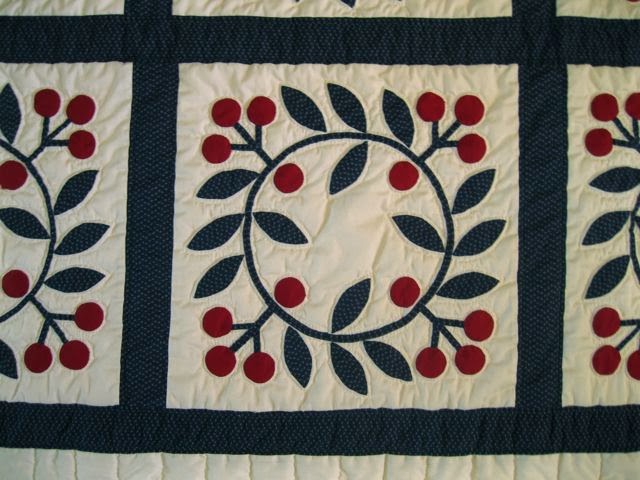 This quilt was made near Millmont, PA.  It was purchased in the early 1990s on the farm of an Amish quilter who was selling both her own quilts and those made by other quilters in the area.

The quilt block is called cherry wreath.  I like the clean, clear look of the quilt, due to the great balance of color, and the expanses of white.  And as every quilter knows, stitching all those circles is a challenge and requires an experienced hand at appliqué. 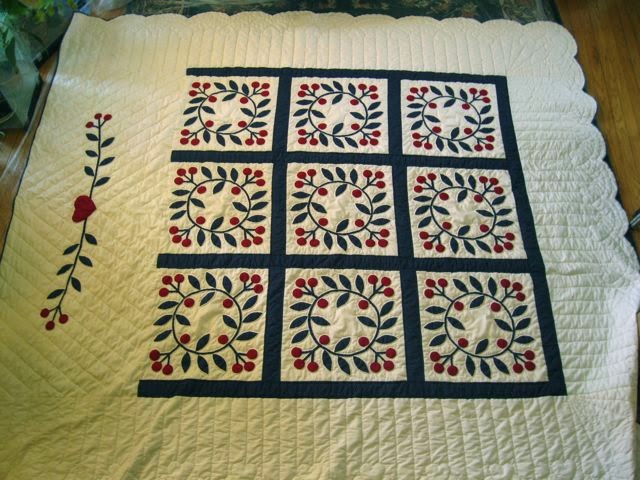 There is a graceful design to decorate the pillows, and sweet heart quilting along the scalloped edges of the large white borders that drop over the sides of the bed. 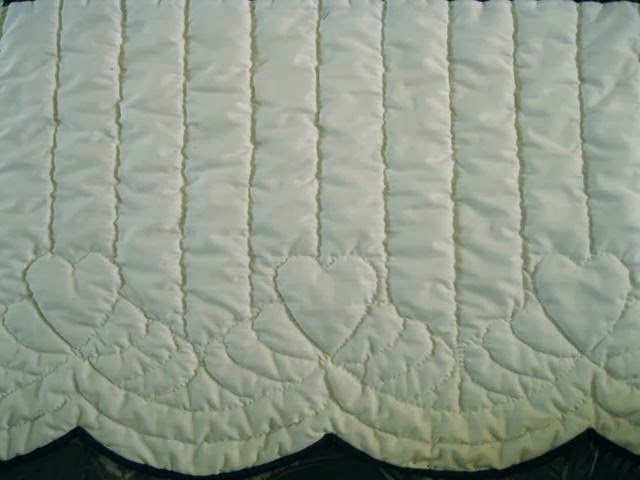 Best of all, I like the fabrics the quilter chose.  The navy print design echoes the appliqué pattern, with its red circles, and stems and leaves.  I always like finding those little extra sparks of creativity and thought, and fabric that is chosen to match the pieced or appliqué design is one of my very favorite treats. 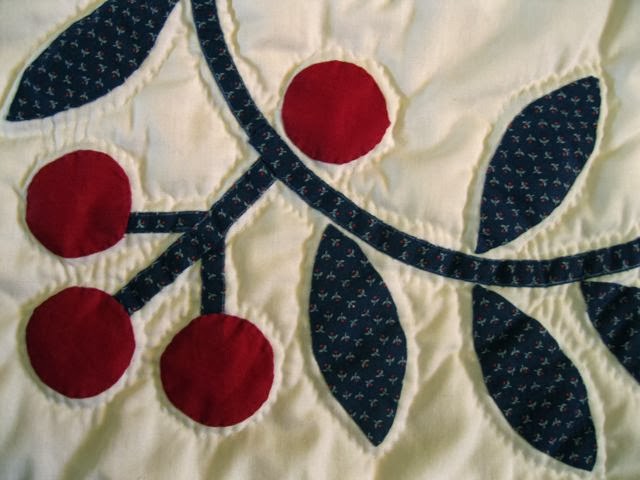 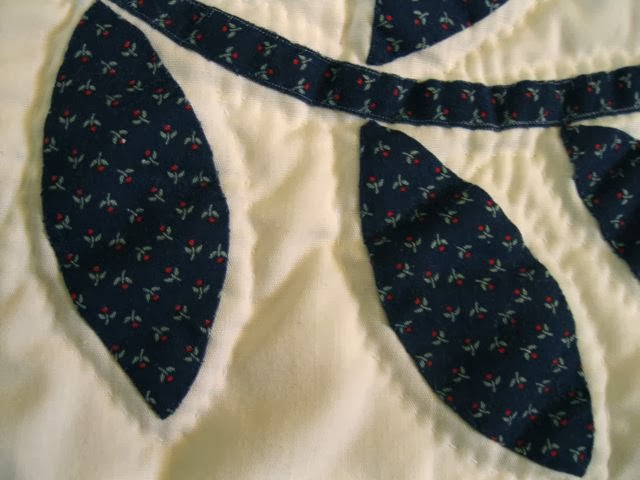 My recent estate sale excursion found this lovely little box, which I bought for my daughter who crochets.  The design is marquetry, inlaid with dyed wood, not painted.  And very sweet and springy, too. 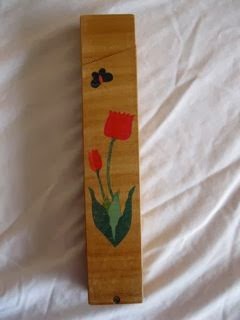 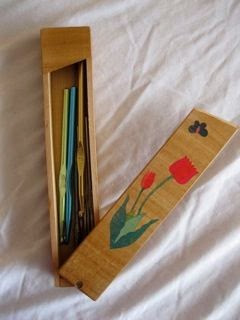 As a child, I worked on several marquetry kits, and loved doing it.  I still have them - that's how much I enjoyed making them! 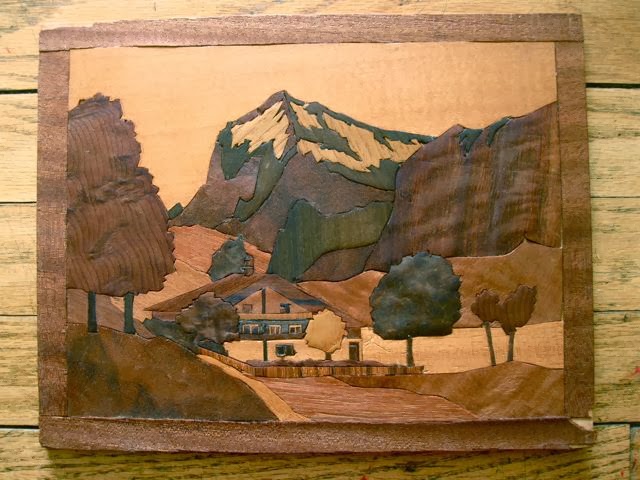 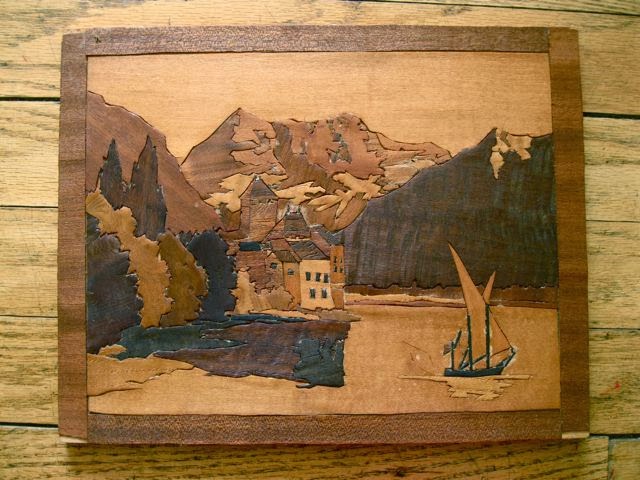 The kits were planned like paint-by-number kits, except that instead of paint, there was a stack of varied wood veneers.  There was a cartoon of the picture, so the shapes could each be traced onto the woods.

As I recall now, it's worked from the top down, background to foreground. Only the top edge of the first shape was cut exactly.  The other edges that would be touched by the next pieces were cut in a rough shape with a little extra wood.  Then the next shape was cut similarly, laid on top of the extra lip of wood, and the first wood cut according to the second, not according to the cartoon, for a precision (hopefully) fit.  It's very intricate, to say the least, and takes a steady hand.

There is a lot of thoughtful detailing in choice of woods, and the grains are aligned to enhance the design, as in this swirly tree, the grain lines in the snow emphasizing the slopes, and the fencing indicated by a strong grain placed vertically. 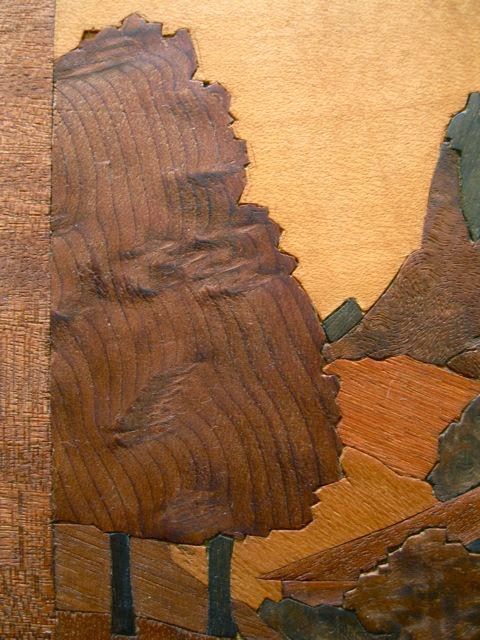 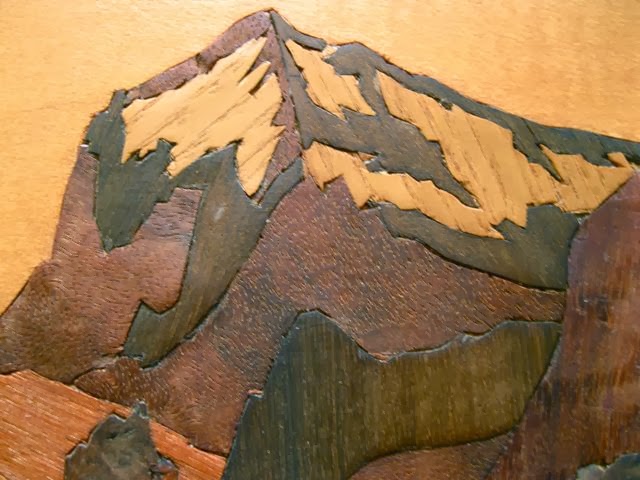 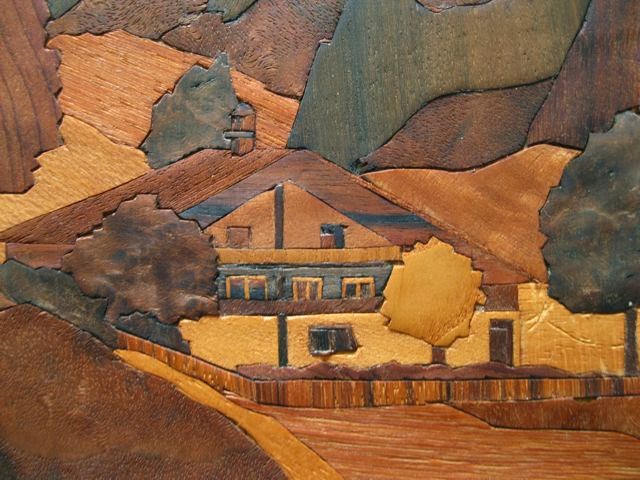 The really skinny lines are made by using the veneer end-on. 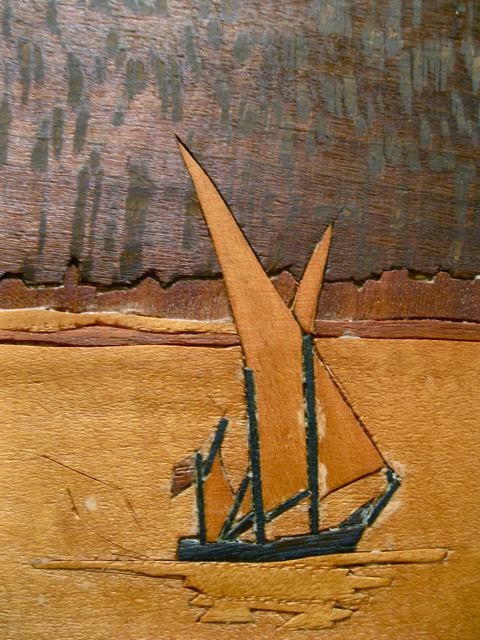 An image search for marquetry will spark your admiration for the artists who have perfected this beautiful craft over many centuries.
Posted by Ann at 9:28 AM 0 comments

I was at an estate sale this weekend, and found several dusty, dingy cardboard boxes filled with dusty, dingy old sewing supplies.  In amongst them, I found these unusual, to me anyway, buttons.  So of course, I brought them home.

My brilliant husband identified them as pewter.  We found out that in the late 18th and early to mid 19th century, many, many buttons were made of cast pewter.  These, according to some Q&A pages and blogs, were made for the folks who do historic reenactments.  These are easily identifiable as reproductions and not originals, because the shank is cast on as one piece instead of being added after casting just the circle.  So, no Antiques Roadshow win for me this time!  I am still quite happy with the purchase and my new knowledge, don't get  me wrong.

These are Revolutionary War style, proudly displaying the initials of the new country. 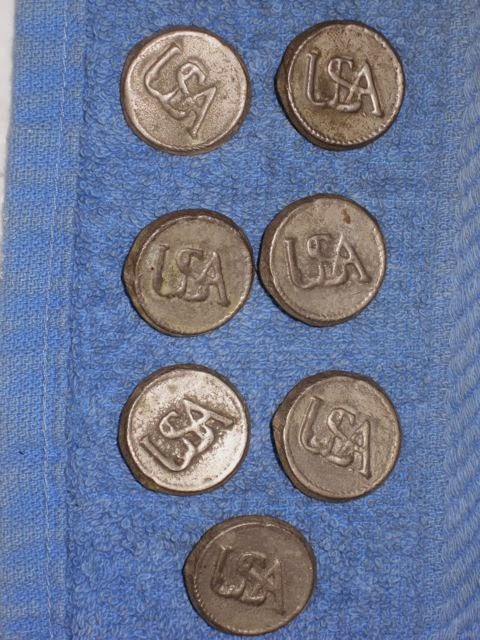 These display a crown and the number 38.  They are British buttons, 38 being the regiment number.  And two sizes, presumably for both front closure and cuffs and collars on those famous red coats. 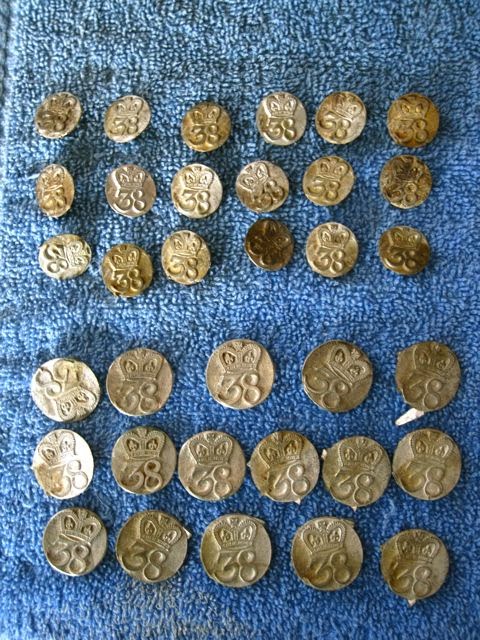 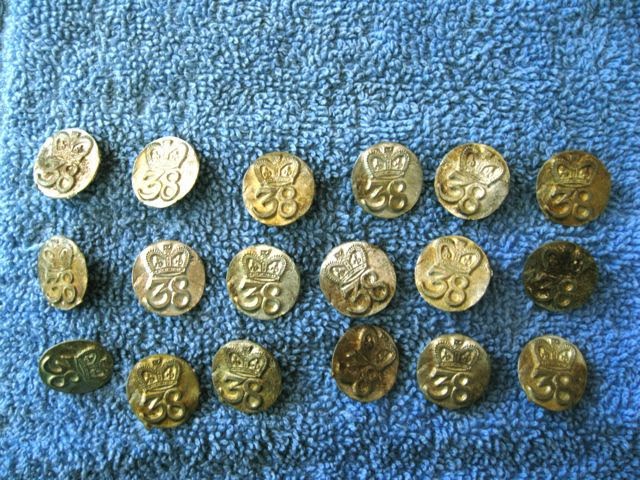 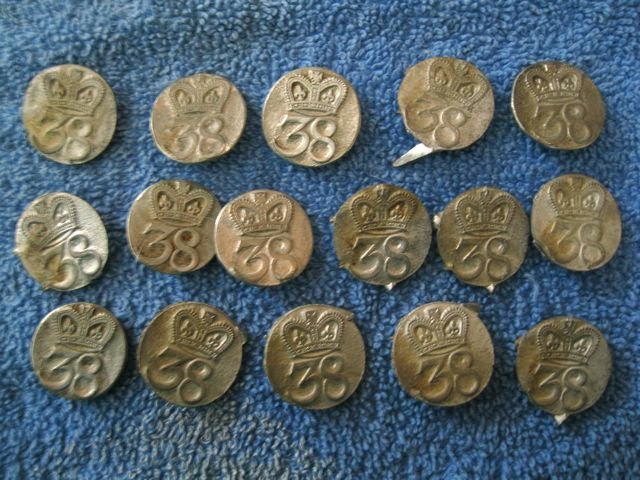 This close-up shows the intricacy of the casting.  Very cool. 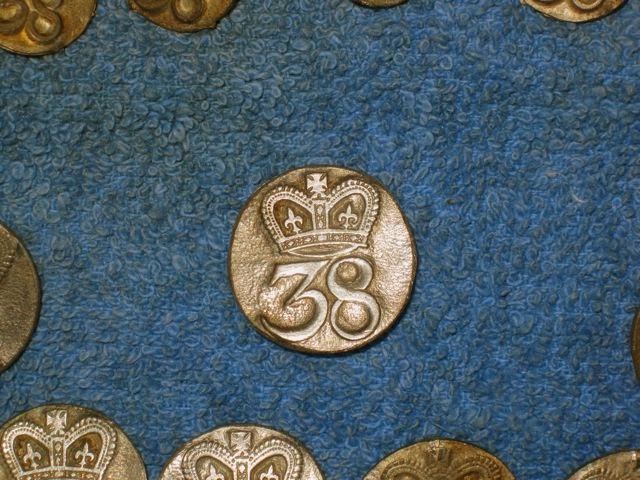 And in the baggie was one lone button from the French soldiers! 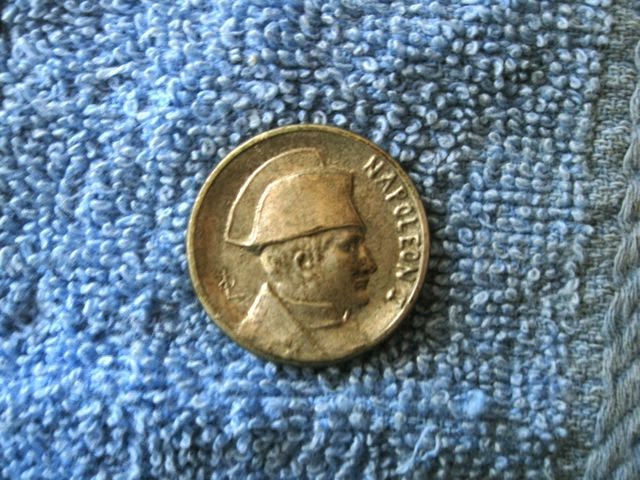