I can think of no better way to celebrate the release of my book on antique quilt care than to tell you the story of this amazing quilt. Now, I love all sorts of quilts, and appreciate repairing anything, from simple comforters that hold memories of overnights at Grandma's house, to jaw-dropping wonderful artwork. This is one of the latter.

It was sent to me by Mark Wilcox of Summer Antiques in upstate New York. The quilt is inscribed "Phelps 1853".  I assumed that Phelps was a family name, but Mark told me that it is a town not far from his shop. Phelps is near the Erie Canal, which was relatively new at the time the quilt was made, and the quilt celebrates the economic growth the canal brought to the area.

And yes, my jaw dropped when I opened the package. Mark and I discussed at length what I would do for the quilt, and I spent a lot of time searching for just the right supplies.

One of our big topics was the choice between "restoration" and "conservation."

For the torn fabrics in the eagle's body and wings, we chose conservation in order to maintain the original fabrics. I found solid tan fabrics to slip under the tears, giving some extra support for my stitches, and also smoothing the visual appearance in those areas.  The loose tatters were then secured with couching stitches. 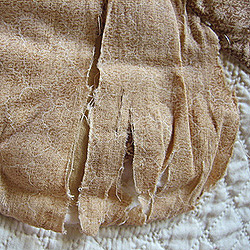 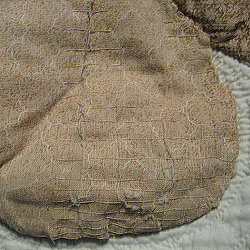 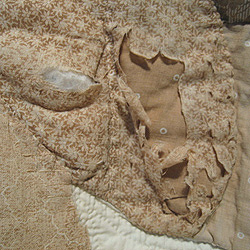 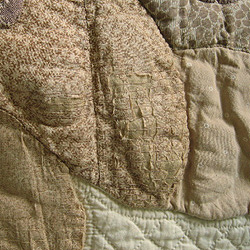 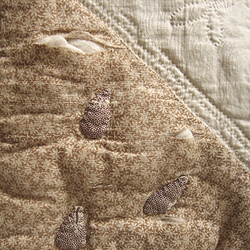 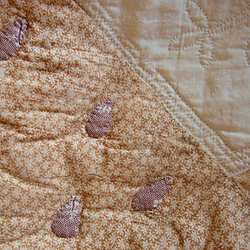 The one place we decided to do some restoration was the arrows in the eagle's talons.  There was virtually nothing left to conserve, plus they are an important part of the overall design.

I found a narrow woven tape for the shafts and a fine silk for the points, following the lead of the little bits of original materials that were still on the quilt.  Placing the new arrows was simple, because the old appliqué stitches and quilting were all still intact. The talons and beak fabrics were pretty threadbare, but enough was left to maintain the design, so we decided to let them be. 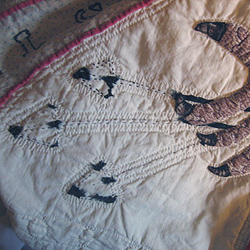 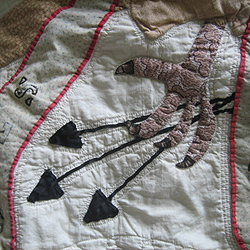 There was a small tear in one of the red scallops that I pulled back together with some more couching. 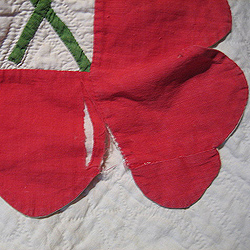 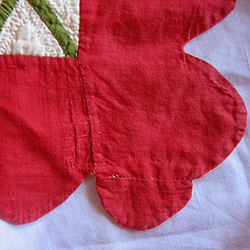 Other than that, the quilt was in fine shape, which given its age, is really marvelous.

The next exciting step was when Mark put it up for auction at Sotheby's. So cool!  But the story gets even better: Sotheby's liked it so much that they featured it on the covers of the sale catalog. Of course, I registered with them, and bought a copy.

front and back covers 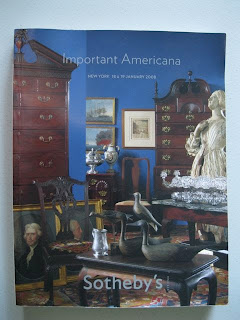 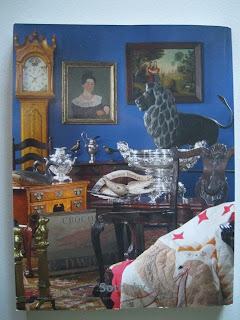 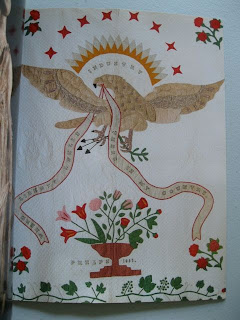 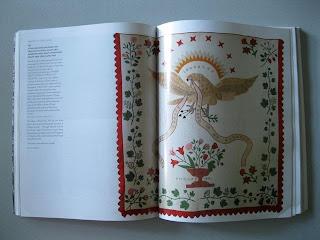 The descriptive text is:

The white cotton diamond quilted field with extravagantly scaled 5 foot American eagle, rendered as sculpture with layers of trapunto and piecing; in its beak a ribbon embroidered with the legend "WHERE LIBERTY DWELLS, THERE IS MY COUNTRY"; below its wings quilted sunbursts with flower-quilted circles; a pieced sunburst above the eagle enclosing the legend "INDUSTRY"; below a pieced compote filled with spring blossoms rendered in pieced and reverse appliqued cotton flanked by the inscription "Phelps, 1853"; the borders with appliqued clusters of red blossoms and vines along with grape vines and tendrils; a cluster of three strawberries and quartet of three-rose bouquets; the whole within scalloped red borders.
88 by 90 in. (223.5 by 228.6 cm)

The village of Phelps New York was one of the first in commercial and industrial importance in Ontario County. Through railroads and the Erie Canal system the theme of towns along that passage way helped create the emergence of 'Industry' in the western section of the Empire State of New York.

The quote is from Benjamin Franklin.

I was able to watch the auction live via the internet. So exciting to see "my" quilt at Sotheby's! The quilt was valued at $30,00-50,000, and the sales price ended up pretty much right in the middle of that range. I really see as this my moment of fame, anonymous though it may have been.

Huge thanks to Mark for choosing me to do this work, and giving me the chance to enjoy this marvelous quilt up close and personal.

P.S.  Another quilt with a different interpretation of this design came up for auction at Freeman's in 2016, a few years after I worked on this quilt.  It was made a few years earlier, and family history indicates that it could also have been made in New York.  I am so curious to find out more of the history of these quilts and the design!