I decided, after a very short thought process, to set the play in ancient Greece, according to the script.  Oberon instructs Puck: "A sweet Athenian lady is in love with a disdainful youth. You will know him by the Athenian garments that he wears."  And that's how Puck mistakes Lysander for Demetrius: "Weeds of Athens he doth wear," says Puck, as he anoints Lysander's eyes with the magic flower.

It always bothers me to hear those lines while the actors are dressed in full Elizabethan "weeds" or modern day clothes or whatever else the director has imagined.  I'm just picky, I guess.

I also took into consideration the age of the actors (7 to 14), the size of the cast (25), the experience level of my sewing parents, and the potential of hot days in early June (which did come to pass).

I reasoned that many of the adult-size robes and gowns we have in the costume collection could easily become gathered and draped Grecian chitons on these smaller-size bodies.  We did a lot of that kind of work, and also made a few new pieces from sheets and hunks of fabric.  Then, we added casings and elastics at the waist, trim, and snap-on belts.  Circlets and head pieces from the collection were altered and trimmed to match.  (Including two new ones for Hippolyta and the fairy Muskrose with which I am quite pleased.) 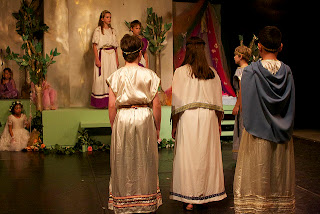 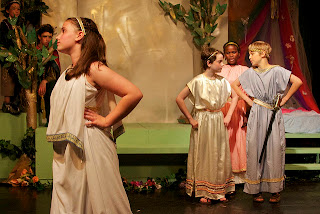 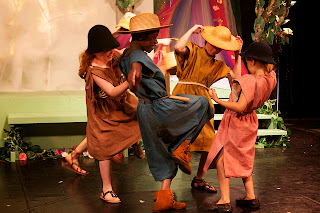 The fairies were "out of time and place", focusing on pouf and sparkle.  We ended up with somewhat of a theme of layers - as we found various bits and pieces that eventually created whole outfits.  We had more fairies than Shakespeare created, and the changeling boy as well.  Since all our young actors wanted a name of their own, we added Dewdrop, Muskrose, and Thistledown, and Acorn the changeling boy.  The names informed the color and embellishments of their outfits - Cobweb white and lacy, Mustardseed yellow with pom-poms, Peaseblossom magenta and white like actual pea flowers, etc.  It was really fun! 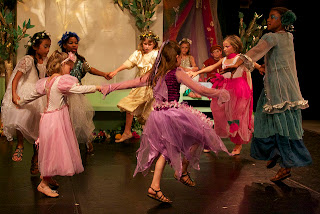 Oberon and Titania were caped and regal.  And Puck, a part of the forest. 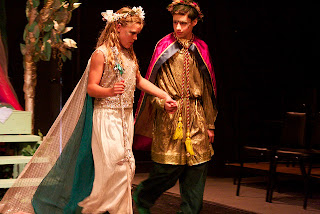 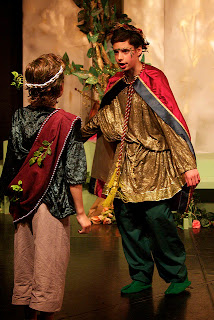 The costumes for the rustics' play were made to look very rough and untutored, things they would have gathered and created from a very limited supply of materials and theatrical talent.  For instance, Pyramus carried a platter as a shield, and the Lion's mane was a circlet decorated with torn strips of fabric. 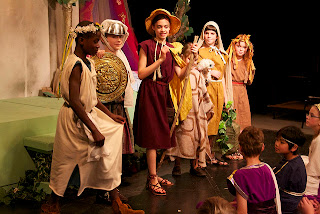 Megan, one of our high school students, gets great kudos for master-minding the make-up process and designing the lovely curlicues for the fairies.  You can see a full set of costume portraits on my website.