My main contribution to this weekend's Thin Ice Theater production of the classic "Arsenic and Old Lace" is the creation of a life-sized doll to be the two dead bodies that are called for in the script. 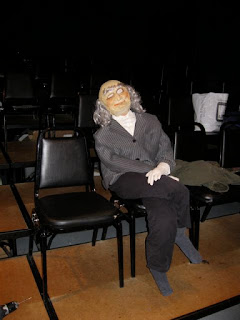 Sometimes he is Mr. Hoskins and sometimes Mr. Spenalzo.  We're hoping there will be time for him to have a super quick costume change.  It's tricky, since he won't be very helpful with the changes.  Another thing he will be called on to do is lose a shoe in the process.

We didn't want to spend gobs of money on fiberfill, so decided to use fabric from the bins of fabric that we inherited along with our wonderful costume collection.  This turned out to be a super good filler, because the fabric gives the body so much more solidity and weight.  He is much more realistic and much less like a poufy pillow.

I started with a t-shirt and added knit fabric tubes for arms to the torso.  His hips and legs were made with some of my daughter's old dance tights.  Mina, who helped me get started, made a folded pillow shape for the chest and rolls of fabrics for the arms.  I stuffed the hips and made the legs with two rolls of fabrics each so he has bendable knees. 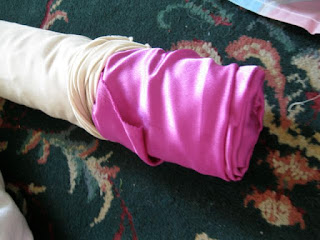 I stitched the two parts together at the waist with several rows of stitching, as well as some stitches that connect the stuffing fabrics inside.  I really don't want him to come apart! 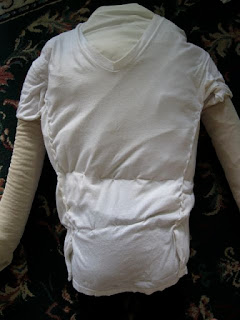 In retrospect, I would not recommend the dance tights for this purpose.  They are too tight, making them hard to stuff to a life-size look.  So at this point, he had pencil-thin legs that looked really weird. 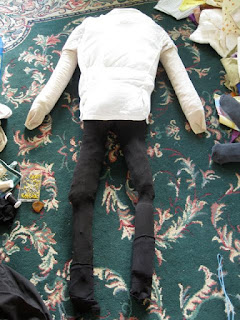 I folded and wrapped on lots more fabric outside the tights, and stitched them on. 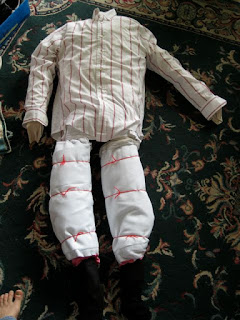 Here he is, at least here is as much of him as there was at that point, dressed in his shirt and pants. 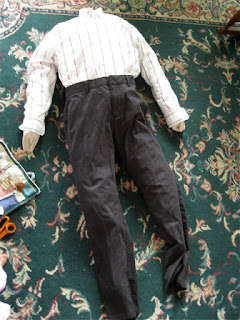 We decided to change him to a solid-color shirt, and then I stitched around the pants waistband twice to keep his pants up. 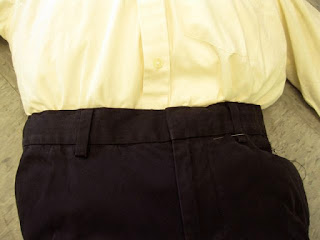 For his hands, I traced a glove, widened the fingers a bit, sewed and stuffed them.  I used little bits of fiberfill in the fingers, and more folded fabric in the palms.  I decided against making the hands like actual gloves, with the finger side pieces which I learned are called "fourchettes".  Mr. S. is only going to be seen in very dim, nighttime lighting.  So his hands came out kind of odd and lumpy, but I figure he probably has arthritis.  I cut the wrist really long to slide on the forearms, and stitched the hands on. 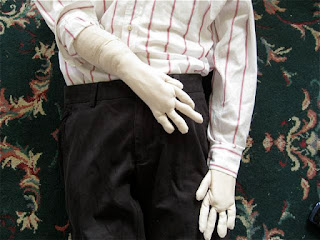 For his head, I used a wig stand that we have, plus a full-face mask. 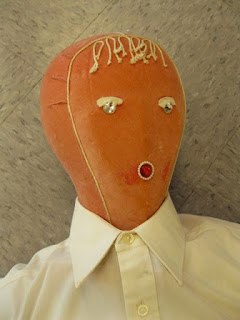 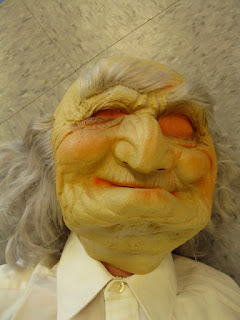 I didn't want the pink of the wig stand showing through the eye holes, though.  At first, I made a little blindfold shaped piece to wrap around the head, but it didn't stay put very well.  So I made this face cover which ties on with three ribbons.  To me, it was the creepiest-looking part of making Mr. S.  I plan to rub a bit of make-up on the fabric that shows in the eyes, to get them to match the mask a bit better.  The base of the wig stand buttons into the shirt collar and miraculously stays on very securely. 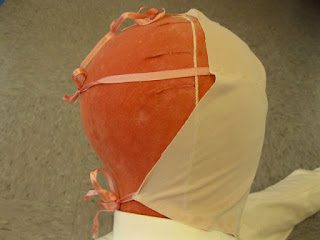 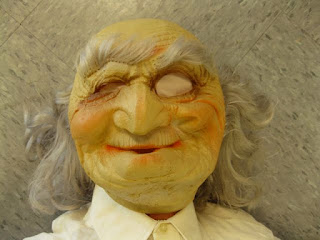 Next, feet.  I wanted the ankles to be strong enough to hold a shoe.  At first, I thought of inserting some L-shaped wire pieces, but that seemed hard to attach.  My friend Julie suggested shelf brackets.  Perfect!  Much stronger, and they have holes just right for stitching them on.  I stitched them to the top of the foot and the front of the shin. 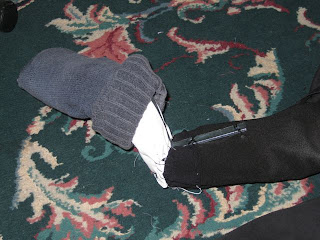 Then I added some more fabric to the top of the foot, and pulled on a pair of my husband's old socks (after mending the holes in the heels!) 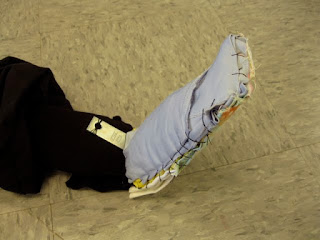 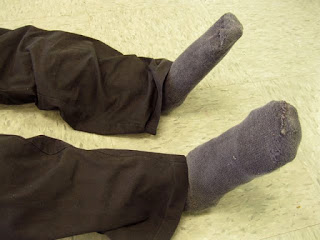 Mr. Spenalzo's shoes are currently being resoled.  They are a pair of old golf shoes, getting new, un-spiked soles.  One needs to stay on and one needs to fall off, but with these feet, the shoes always fall off.  So when the shoes come back, I'm going to try a couple of ways to keep one of them on with an elastic loop.

Here he is, lounging on our couch. 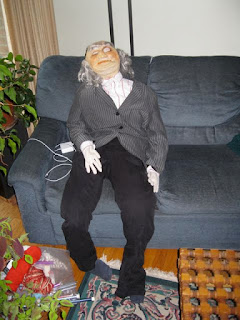 And here's Mr. S. at the theater, watching the construction of the set. 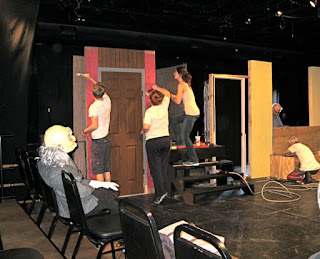 Here he is, hard at work during the play, secretly stashed in the window seat. 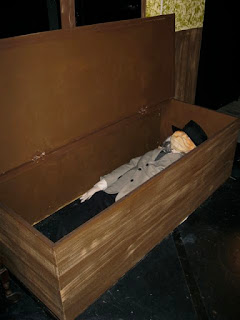 Here's the celebration portrait I took upon his completion.  Just call me Mrs. Frankenstein. 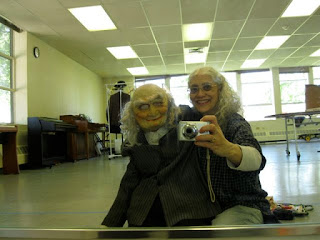