I wrote about the Social Justice Sewing Academy in a post last fall, and showed these first two blocks I worked on.  You can hear a great interview with SJSA founder Sara Trail at the Just Wanna Quilt podcast. 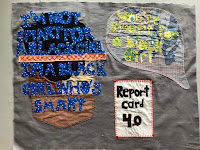 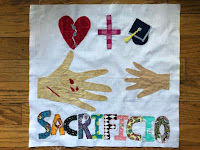 A quick summary:  Blocks are designed and created (pieces glued on) by young people to express their social justice concerns and dreams.  The blocks go to sewists like me who embroider them to attach all the pieces securely and add texture and depth.  Then the blocks are made into quilts by more volunteers and sent to galleries and shows.  The final result is a bunch of young people who learn that art can express who they are and that their concerns can be heard.  It's simply wonderful!

I kinda forgot to keep posting blocks, so here are the next four that I've done.  The project is both fun and extremely fulfilling.  It is a true blessing, tapping into the great emotional depths and wonderful visual expressiveness of teens who need to be heard.

Block number three.  I think this one has incredibly strong imagery. 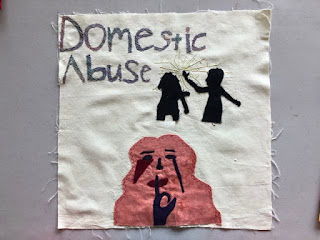 The letters were so thin that I added kind of a herringbone stitch over them rather than trying to stitch through them.  I looked online for photos of broken glass, and adopted the look to stitch behind the raised hand. 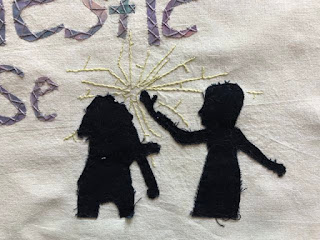 But this was the image that really impacted me.  I see this as the battered person, beaten to a pulp, barely still human, so hurt, and yet pleading for keeping the secret.  Wow. 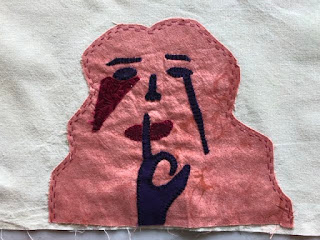 Block number four, before and after.  The block's designer asked me to embroider the features and lines on the statue, and included a sketch. 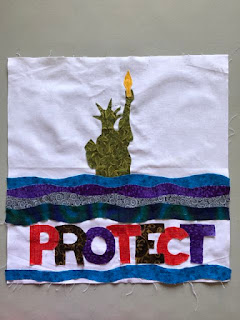 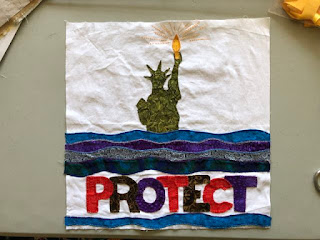 Block number five.  This one also had a huge impact on me.  (I forgot to photo it before I started embroidering, hence the sun rays.)

The block came with a note asking for specific text to be added, "end gang violence" in the white and "RIP" on the gravestones with names.  Again, I found the imagery very powerful, such a look of desolation. 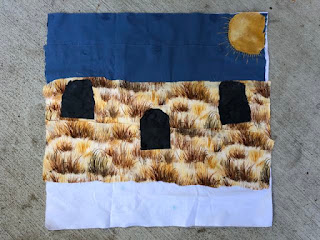 I found a graffiti font and a cemetery-looking font and printed them to the sizes needed.  I traced them for transferring to the quilt. 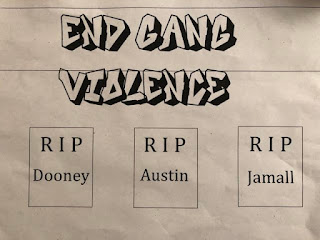 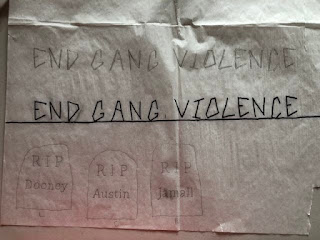 I could trace onto the white fabric at the bottom, but that wouldn't work on the gravestones because there were several layers of fabric there.  I ended up basting on the tracing paper, snipping the letters, and marking through the snips with a white pencil. 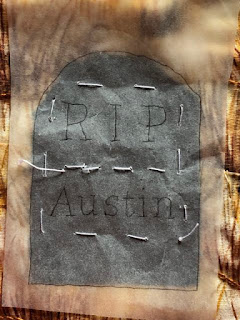 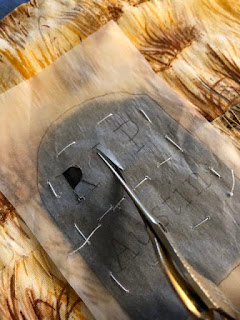 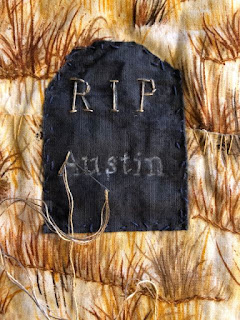 For the lettering, I stitched the strokes with several strands of floss, then couched the longer stitches with a single strand. 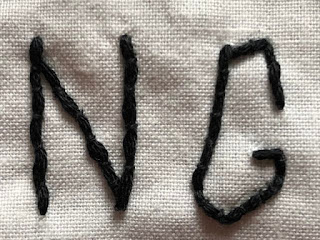 The grass was attached with long straight stitches and chain stitches under the tufts of grass.  For the sun, I did variable length buttonhole stitches. 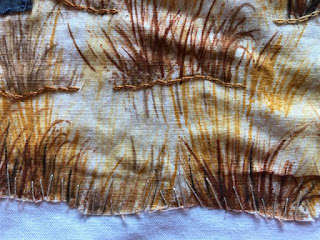 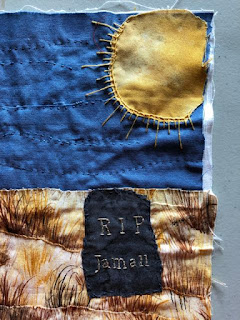 Here's the finished block.  It really is such a privilege to help these young artists have their messages heard on such huge and important topics. 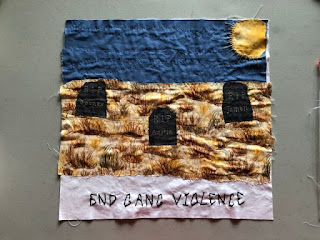 My sixth block was also a plea to end violence. 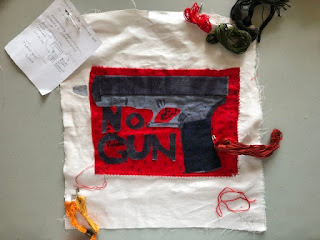 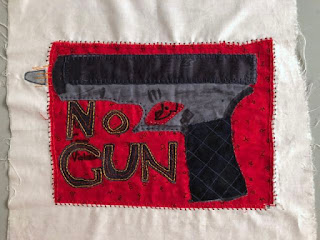 And a final note:  I've just discovered a new page on the SJSA website which has a slide show of blocks, if you want to see more.  I'm just continually impressed by this work.