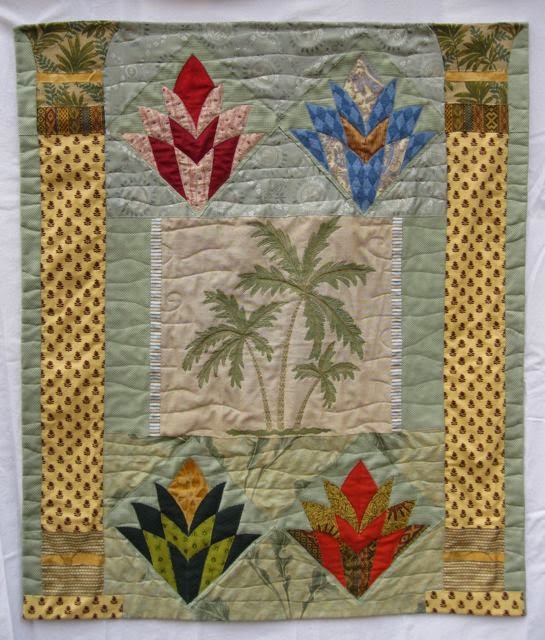 My entry in this year's Fine Art of Fiber show is another in my series of quilts called Something From Nothing.  This is my own little challenge project, made with decorator fabric samples and other "found object" fabrics and trims.  You can find photos of the whole collection on my website.

What follows are the steps I took to create this quilt.

The initial inspiration was the 1940s quilt I recently repaired.  I was really drawn to the Art Deco style of the block, and then I stumbled upon the name - Cleopatra's Fan.  This is such a perfect pairing of influences for me, because Ancient Egyptian artifacts and culture were what inspired me to major in archeology in college.

In keeping with my challenge, which "requires" the patchwork design of the quilt to relate to the prints on the fabrics, I decided to combine the block with a single, large, fabric sample featuring palm trees.  I went from there, choosing fabrics that had some of the look and feel of Egyptian design and royal gold. 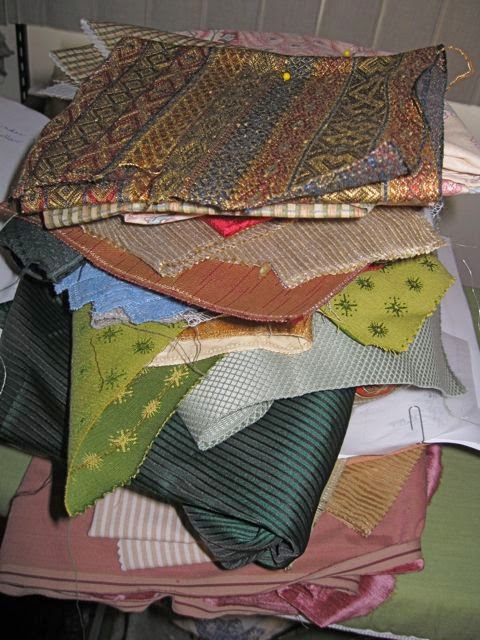 This is the layout concept, pinned to my design wall. The white paper squares represent the Cleopatra's Fan blocks.  The layout was limited by the size of the fabrics.  I would've liked to show more tan space around the trees, but what you see there is pretty much all there was, i.e. not much on the right side.  And the fabrics behind the blocks are also limited in width to what you see.  So I had to make the blocks fit on top of that.  I used the on-line pattern discovered by a wonderful reader of this blog, and printed it at a reduced percentage. 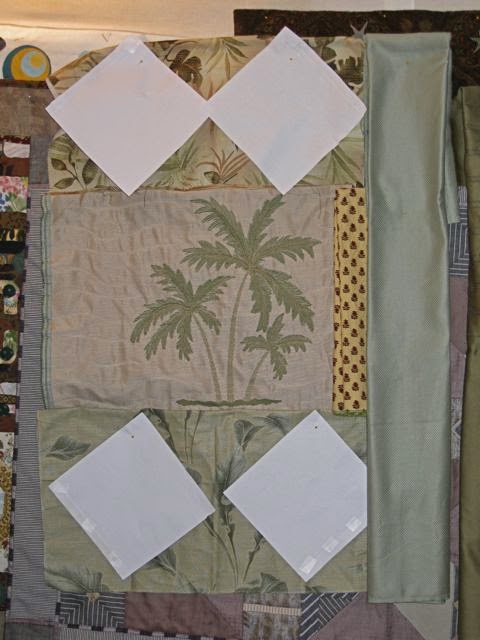 I pinned up fabric combos for the fan blocks.  You'll notice the combos changed a lot as I actually designed the blocks.  At this point, I was just happy to meet my goal of having the the colors pop against the more neutral colors everywhere else. 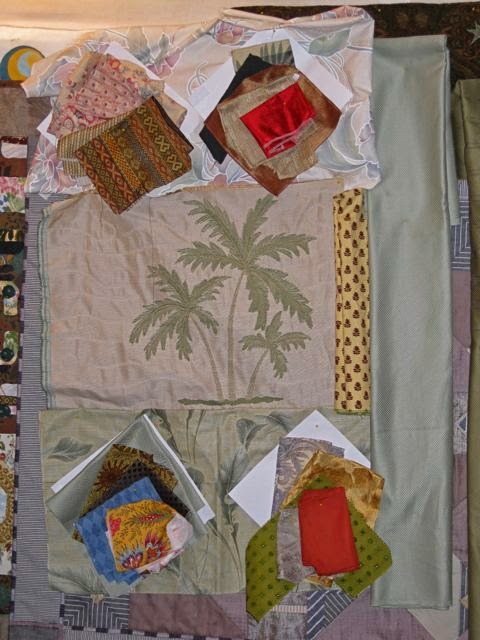 Somehow all of a sudden, I got the idea to create temple pillars on each side of the center panel.  I reversed placement of the soft green and the tan/rust print. 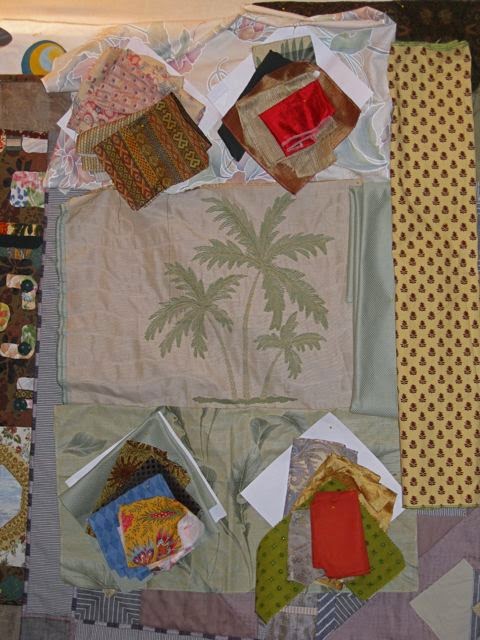 Next, I cut and pinned the fan blocks, checking color and balance.  I narrowed the fabrics down to three in each block.  I also was auditioning another fabric for the top panel background.  The first one seemed too light and too pink.  I didn't like this second one either; the print was too bold and detracted from the blocks. 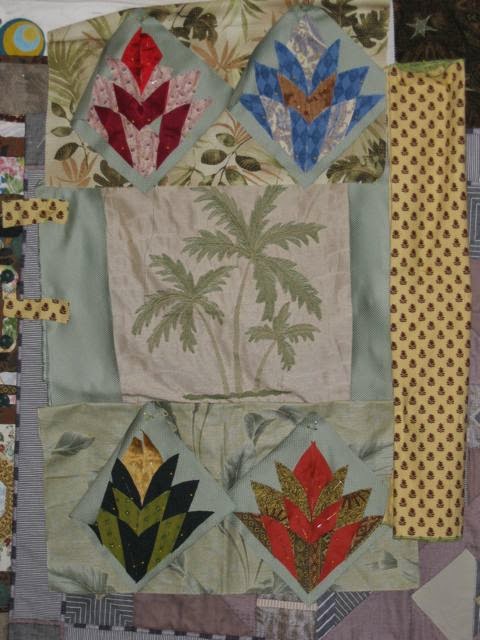 Here's another piece auditioning at the top.  Too bright.  I thought maybe putting some on the sides as well would help.  Nope. 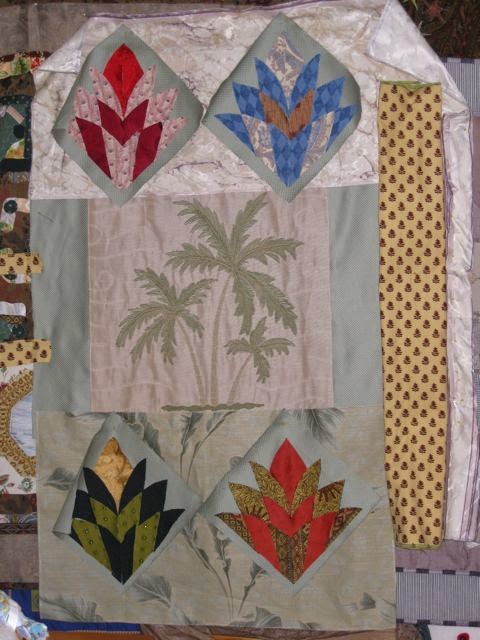 The top piece I settled on is still not exactly what I wanted, but I can make a case for it.  It's pale blue, so kind of sky-ish, also shiny like a crazy-hot Egyptian sunny day. I can stretch a point, and say that the design is kind of Greco-Roman-ish.  That's OK because in Cleopatra's time, Egypt was within the Grecian empire; Cleopatra was Macedonian, not Egyptian.

I really enjoy the challenge of working with what I've got.  I kept wishing there were two pieces of the fabric behind the bottom blocks.  But then again, that might have made the quilt just a little more predictable and boring.  Right?

Also, I started playing with shapes and fabrics for the capitals and bases of the columns.  I looked online for photos of temple pillar proportions and decorations. 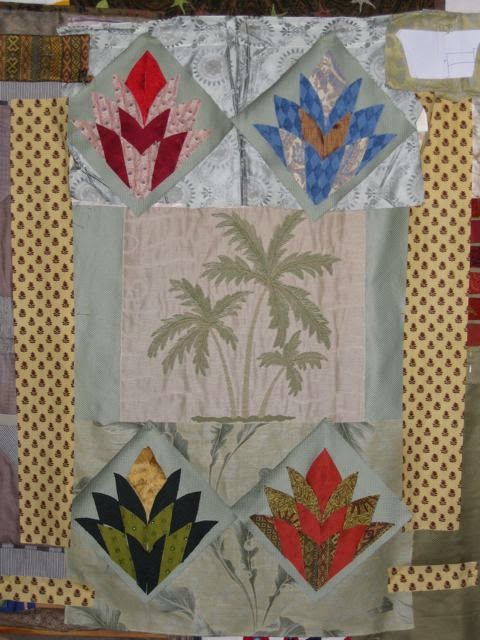 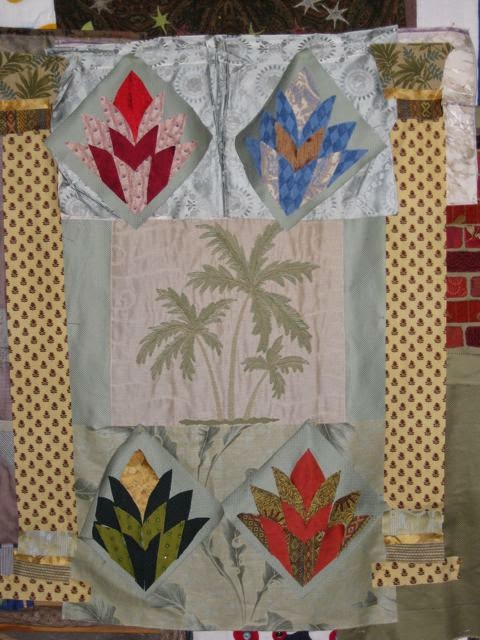 Here's the final, pinned-up design before the actual stitching began. The little striped edge to the palm trees was a last minute inspiration.  It gives the quiet center panel just a little bit of extra brightness, which draws the eye there better, instead of having the fans and columns totally steal the show. 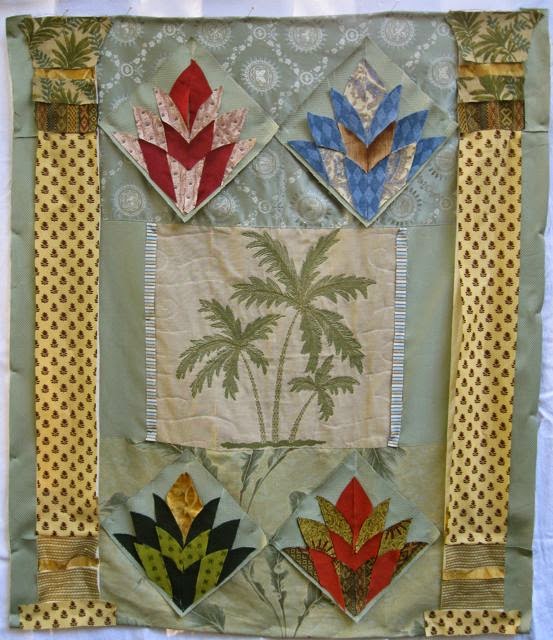 All the sewing is appliqué.  These fabrics are various weights, and many are too thick and stiff to lay well after piecing.  I used invisible nylon thread with a zig-zag stitch, not too open, not too close, but juuuust right.

And - the finished quilt.  The woven lines of the palm tree fabric made me think of wind, and became the theme of the quilting pattern.  The blocks and columns have quilting around the fabric pieces. 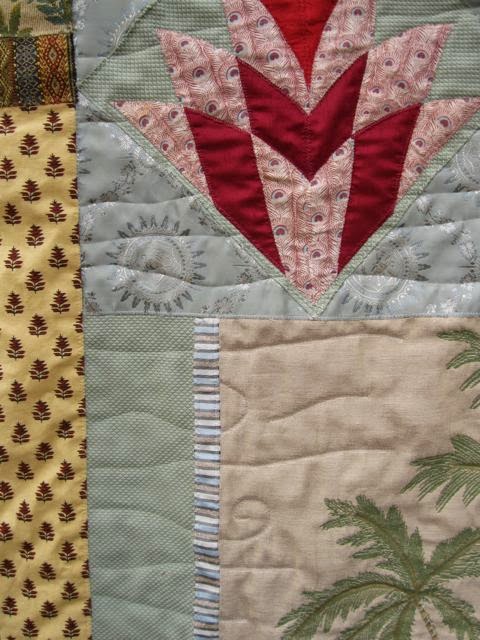 All this from the inspiration of one 1940s quilt plus a box of random fabrics!