Heirloom Quilt with Family Photos and Some Flashy Peacocks

One of my favorite parts of the quilt repair biz is when someone brings a family heirloom quilt and shares the story and occasionally even photos of the quiltmaker.  More often, people tell me sadly that none of their offspring care very much about "old things" or the family history.  But here's a quilt brought to me by a young woman who is very, very much in love with the family story.  Warms my heart! 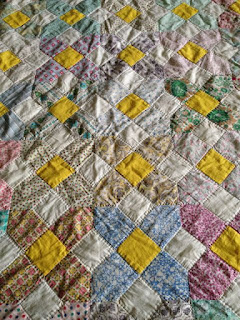 Here is her story of the quilt and the quilter.

Attached are photos of my Manx great-grandma. The first one is from just before she left the Isle of Man, she is in her early 20’s. The second photo was from the early 60’s. 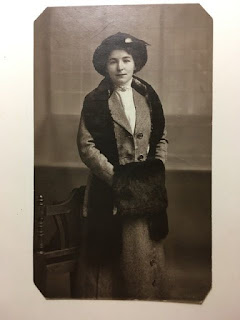 Eleanor Jane Cleator was born in the Isle of Man on August 11, 1891. She was known by family and friends as Janie.

She migrated to the United Sates in 1915. Upon arriving she married her sweetheart from the Isle of Man. They settled in Kansas.

She was a woman of her times. Doing all a housewife and mother did. She raised 2 children, tended the family vegetable garden, raised chickens, tended house, cooked everything from scratch and more.

When the cooking and cleaning were done there was no rest for her. She spent her evenings quilting, knitting, sewing, doing embroidery and crocheting. Everything was practical. Quilts were made from old worn out clothing. Sweaters, hats, mittens and such were not bought but knitted. And the home was decorated with furniture made by her husband and decorated with embroidered fabric and crochet doilies and tablecloths made by Janie.

I am not sure where she learned her crafts. Her mother died when she was 8 and a few years later she had a step mother. So perhaps it was mainly the stepmother that taught her and, of course, necessity. Janie’s only daughter and my grandmother only learned to knit, but never with the skill that her mother had.

I never got to met her. She died when I was one. I currently own many items made by her including a quilt, 2 button down sweaters, 3 embroidered and  framed images of flowers, some crocheted items, and a stool that was made by my great-grandfather with an embroidered cover made by Janie.

And about the quilt itself:

I found the name of the pattern, Pointed Tile, in Brackman's Encyclopedia of Pieced Quilt Patterns.  It's kind of fun, because it's not an actual block.  It's an overall pattern made up of squares and what might be called house-shaped pieces. 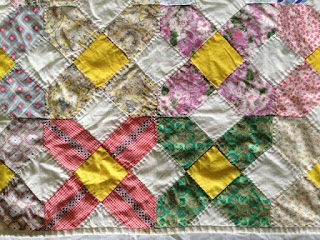 The fabrics are a really nice collection of 1950s and 1960s prints.  I'll start with my favorite - these great peacocks and roses on a flashy magenta background. 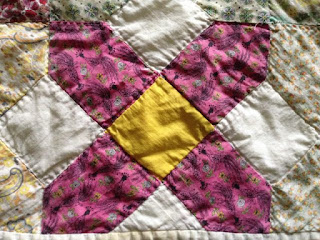 In the rest of these photos, you'll see such 1950s color combinations as salmon pink-olive green-grey and the prints with repeating square medallions which I always call men's pajama prints. 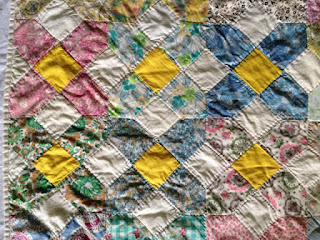 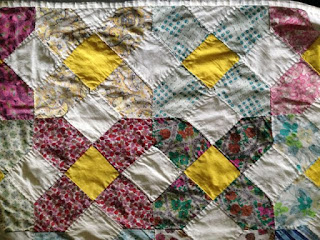 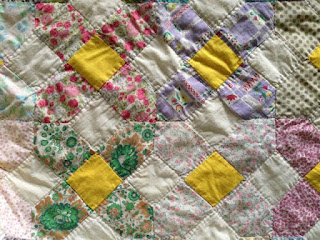 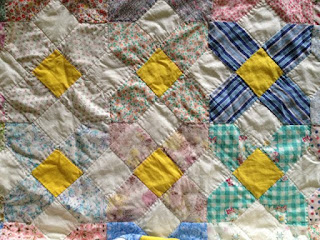 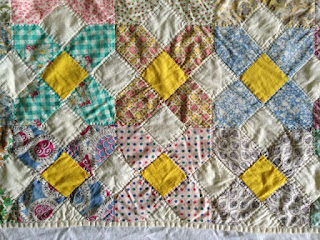 Big thanks to this lovely young woman for taking the time to send the family story and sweet photos of her great-grandma and letting me share it all with you!

Here's another quilt I repaired, a c.1890 crib quilt, with the story and family photos supplied by the quilt's current owner.