A Little Bit of Hawaii to Warm Up Your January 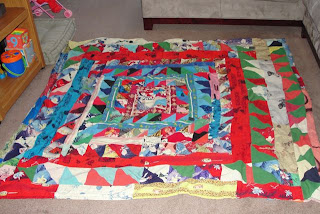 This bright and cheery quilt was made by the owner's great-grandmother.  It is tied with thread to the back, which is pieced mostly of large solid turquoise and tan rectangles, with a few more Hawaiian print pieces in the mix as well.  There is no batting.
Several of the seams have ripped open over time, and been stitched back together.  In most cases, there wasn't enough fabric to actually recreate the seams, so the fabrics had just been stitched to the backing.  The stitching was done with white thread, and with higgledy-piggledy stitches.  Some of that stitching caught the back fabric in such a way that some large puckers were created.  This photo shows one of the most damaged areas (and one of the smaller puckers). 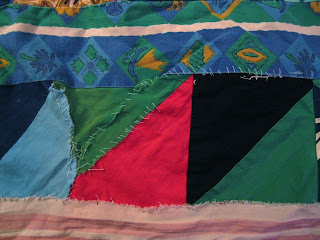 The back also had suffered some holes and rips. 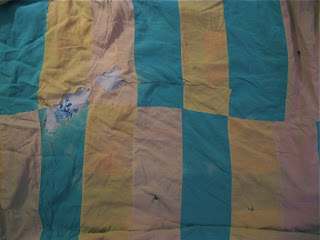 The owner wanted to keep the original fabric, as the quilt holds the memory of her great-grandmother's sewing.  I removed the old white stitching.  I replaced it with stitches in matching colors, and was careful to work without adding puckering this time.  Also, I stitched with a herringbone stitch.  This puts the pull of the thread parallel to the edge of the fabric, and lessens the chance of the stitching pulling through and making the situation even worse. 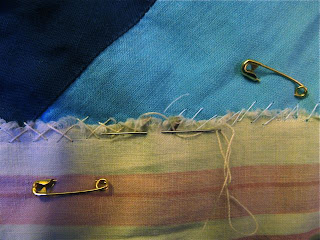 I decided to patch that one green triangle, since there was so little left of it, and being a solid color, the patch did not change the look of the quilt.
Here's that area before and after: 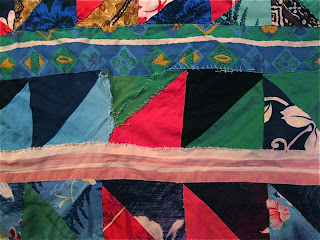 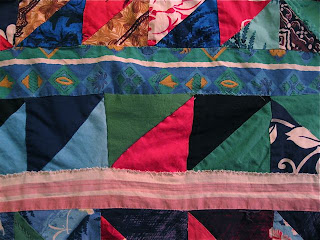 Then, I added a new back.  The owner requested purple, since that is both her and her great-grandma's favorite color.

Here's my basting frame with the new backing fabric pinned in. 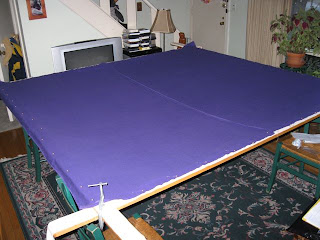 Here's the quilt spread out on the new back. 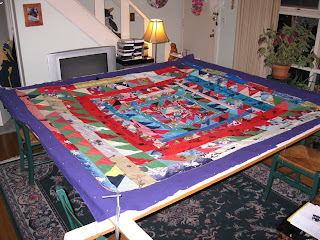 The original ties were done with a double strand of black floss, so that is what I did, too. 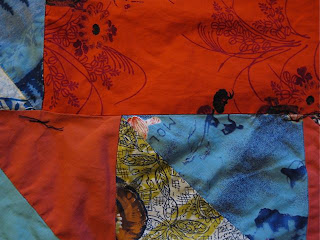 While the quilt was in the frame, I basted around the edges to hold the layers together.  After all was tied, I took the quilt out of the frame, turned in the edge of the new purple back, stitched it to the quilt, and then removed the basting. 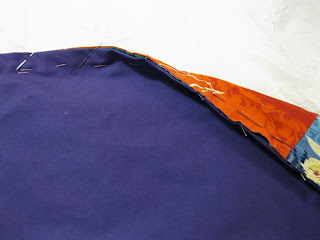 Here's a close up of the fun stitch that the quiltmaker put around the edge of the quilt.  I've never seen that before - a nice look, and so easy to do! 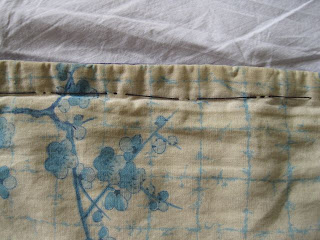