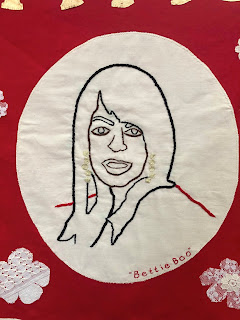 Hi, everyone.  My recent three weeks of sewing have been deep and meaningful.

As some of you know, I have been doing some sewing for the Social Justice Sewing Academy for a while now.  This is a brilliant organization, lovingly and thoughtfully created and organized. The mission statement includes using and teaching sewing and art skills as a way to voice social justice topics and to give voice to parts of the population who are underserved or not served by the art world.

I can best describe the Remembrance Block Project by quoting from the website:

...a quilt block community art project that will provide activist art banners for local and national activist organizations who have requested creative statements to be publicly displayed that represent solidarity as well as remembrance. This partnership will create a visual statement to memorialize those who have been unjustly murdered by community violence (e.g. gun violence, domestic violence, child abuse, etc.) race-based violence, law enforcement, and gender or sexuality based violence. These artivism blocks will honor the lives of individuals through symbolism and portrait. Their names and identities will be displayed during community activism events reminding the world that their lives mattered.

Unfortunately, as we know, the list of names is very long and continues to grow.

I received my assignment three weeks ago.  I spent the first week researching the life cut short that I was to memorialize, and two weeks on the sewing. 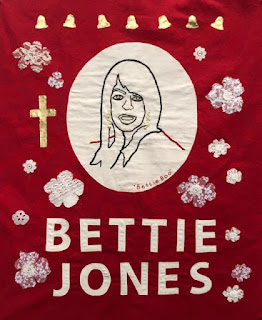 This block honors Bettie Jones, who died on December 26, 2015 after being shot while trying to help a neighbor in distress.  There is lots of information online about her murder, because it was complex and in litigation for 4 years.  Her landlord and upstairs neighbor had called the police because his son was suffering from mental illness and had become violent and threatening.  The landlord asked her to open the door for the police, but when she did and the officer saw the son coming downstairs and towards him brandishing a baseball bat, he fired into the building.  He killed both the son (Quintonio LeGrier) and Bettie.  Quintonio himself had called earlier to ask for help, but the dispatchers didn’t send anyone.  In the end, the officer was fired and the dispatchers suspended for some time.  To me, this whole heartbreaking story highlights so many ways that this system is broken.

Red was Bettie’s signature color.  She was the matriarch of a loving family, and so I surrounded her with flowers representing her 5 children and 9 grandchildren.  This reminds me of all the large red and white flower arrangements that surrounded her red coffin at her funeral.  The golden bells at the top represent the family choir called Seven Bells.  Her nickname was Bettie Boo.

And here are some in-progress and detail photos. 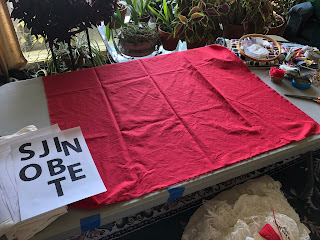 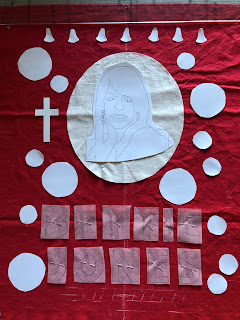 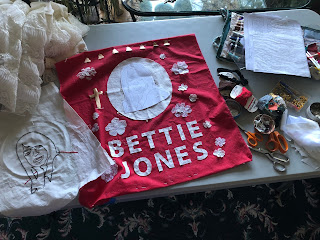 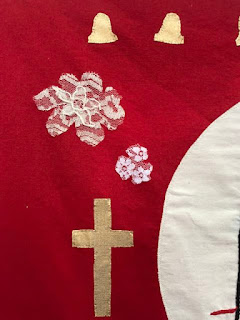 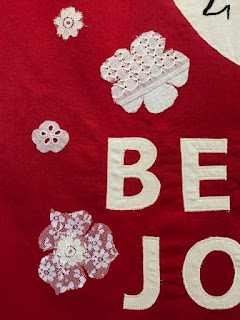 The Remembrance Blocks are an on-going project.  You can register to stitch a block on the SJSA website.  There are other projects on-going as well - another sewing project to make memory quilts for bereaved families, and a brand new small business incubator.

There is also a block-of-the-month project.  These blocks are designs by the students in the social justice sewing workshops (which are now on hiatus due to the pandemic).  The blocks are super powerful.  I made one back in March. 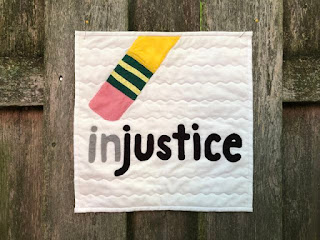 I can tell you that this was not emtionally easy, but it has opened my heart and taught me a lot.  It has been a very Good thing to do.

The growing collection of Remembrance Blocks is on Instagram at @sew4justice_sjsa.

So, having just blogged about my entry in the Eye Contact show yesterday morning, this post about the exhibit showed up in the evening on my instagram!  (It's in two pieces because I couldn't screen shot the whole thing in one go.) 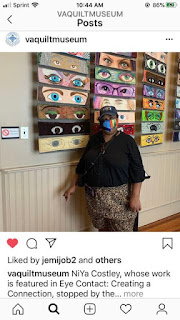 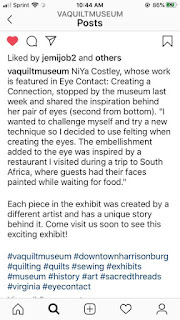 And then, this afternoon, another post by the Virginia museum. 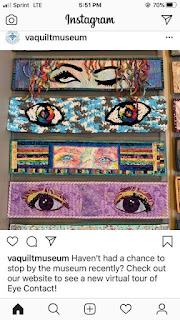 So, I get to share a little bit of the exhibit.  And look up above NiYa's quilt (wouldn't the restaurant that inspired her design be a fun dining experience!) and....Hello!  There are my eyes!

An exhibit called Eye Contact: Creating A Connection has recently opened at the Virginia Quilt Museum in Harrisonburg, VA.  The exhibit runs through September 15, 2020.

I love everything about this show.  For one thing, I always love a challenge quilt show.  I find all the different, creative ways the challenge topic is expressed to be endlessly fascinating.  I also love this particular show because I have a quilt in it, and I had such a deep experience in making the quilt.

The quilts are small - 23" wide x 5" high - and the only instruction to the artists was that the subject be "two human eyes looking at the viewer".