I've been readying a crazy quilt top for hanging, and thought I'd share some photos with you.  Like the six-pointed star quilt and the hippie crazy quilt, this is a wonderful collection of fabrics of its era, a good reference collection of colors and print styles. 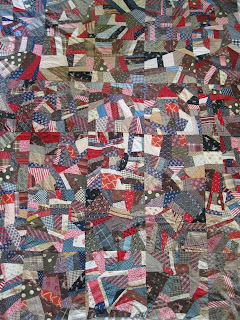 I think this quilt was made in or around the first decade of the 1900s.  Like any scrap bag quilt, there are several decades of fabrics represented.  The majority of these fabrics date to the 1890s and 19-oughts, and with some maybe from the 1880s. 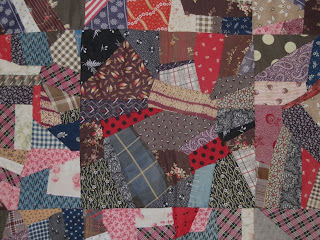 Hallmarks of this era are two color prints and prints with less fine detailing than those from earlier in the 1800s.  Many of these prints are on a solid rather than a detailed background. The so-called "mourning prints", black on white prints with enough patterning to look like black and grey, also date to this era.  There are also some "double pinks" which were popular for so many decades that they are not a very good time marker.  The color palette of red, brown, black, navy, and the lighter "cadet blue" is pretty common for these decades.  The reds, as here, can be quite bright by comparison to reds earlier in the 1800s. 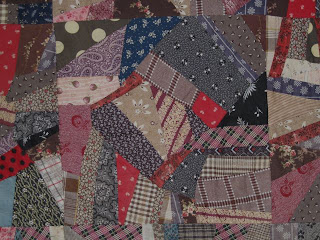 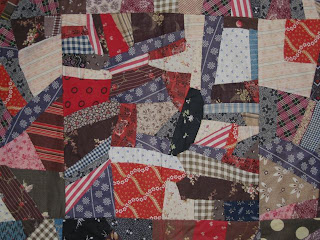 This is a quilt top, never finished, and therefore probably never used.  So it presents all these fabrics in pretty much their original colors.  It's a great reminder that keeping a quilt away from the fading and stresses of everyday use, washing, and daylight can really make a difference in the longevity of the quilt. 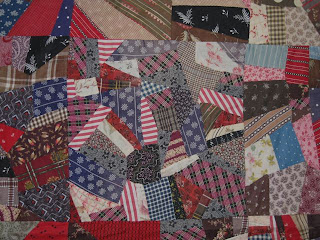 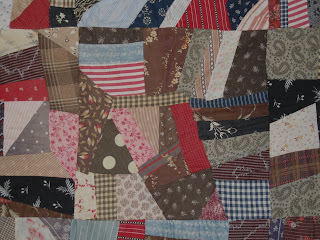 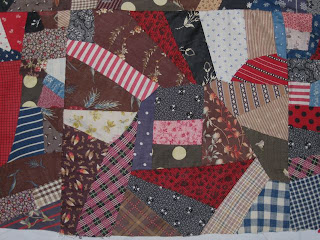 And check out the purple and green on black prints in these two blocks - so very 1890s. 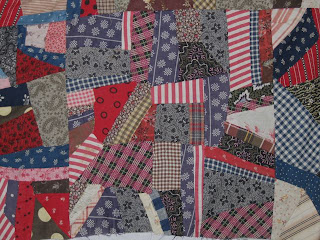 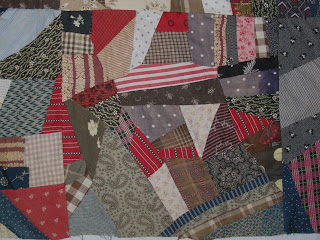 A book I find very helpful for learning about fabrics through the decades is Dating Fabrics: A color guide 1800-1960 by Eileen Trestain.  It has pages and pages of swatch-sized photos for each stylistic era, arranged according to color. 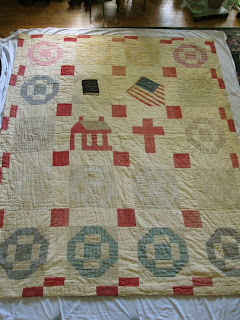 A friend of mine wrote and asked me why the Grecian Square blocks in the "red, white, and symbolic" quilt I recently wrote about have that name.  What is Grecian about them?

I had discovered the name of the block in Barbara Brackman's Encyclopedia of Pieced Quilt Patterns.  If you are at all interested in quilt history, quilt collecting, etc., this is a book that you would enjoy having in your library.

Brackman's sources for the name are the "Nancy Cabot" syndicated newspaper column of the 1930s and the "Woman's World" periodical from the 20s and 30s.  Both of these, interestingly enough, are Chicago-based.  Both also published and sold quilt patterns. 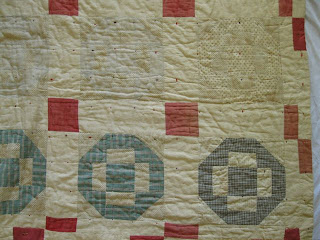 If the colors are arranged differently than in this quilt, with the center square and the rectangles around it in the same fabric, it makes a plus sign cross.  Then the block is known as Greek Cross, because the patchwork resembles the plus-shaped Greek cross.  This block was published by Ruby Short McKim in her newspaper column, based in Independence, Missouri.  McKim also published patterns, and her book "101 Patchwork Patterns" was published in 1931.
Greek Cross                          Grecian Square

The 1930s, Depression era, was a boom time for quilts.  Making useful things cheaply from scraps, looking back to heritage and better days - all these things built up the love of quilting.  This era was also the beginning of the quilt pattern and book publishing industry that we know today - and the entry of women into the world of such nationwide quilting businesses, Ruby McKim being one of the most well-known. Her original pattern for Greek Cross can be seen here.  If you want to delve further into her life and her patterns, her heirs have created this website about her.

So it might be that, at some point, someone made the Grecian Square block as a color variation of the Greek Cross, and decided that since the patchwork shapes are the same, that the names should also be similar.


As I was making these little sketches, I placed the colors wrong at first - and look what I found!  Same patchwork, and yet another block.  Again referring to Brackman's book, I found that this block has a plethora of names (20!).  The ones I am most familiar with are Churn Dash and Monkey Wrench. 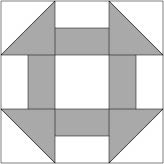 That's when quilt patterns and names get both fun and confusing.  For such a long time, up until the Depression era really, quiltmaking was mostly an oral tradition.  If you've ever played Telephone as a child, you'll know how flexible oral tradition can be!  And with very straight-forward, easy to piece, patchwork like in this block, it's no wonder that it travelled around and collected lots of names.
Posted by Ann at 4:14 PM 0 comments 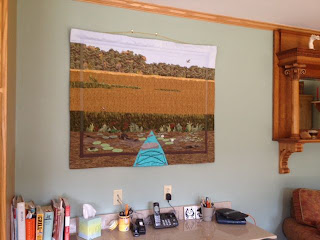 My zoologist friend visited me in June and picked up the landscape quilt I made for her.  It is a portrait of the fen where she does her fieldwork.

The quilt is now happily hanging in its new home.  My friend just sent photos, and here they are.  I am so happy to see it in situ.  The colors really work well with the rest of the room, I think.  And my friend can work at her desk and dream about being out in the kayak - gliding through the grasses and visiting the bog buckmoths, the turtles, frogs, and dragonflies, all the while watched over by the deer and hawk.  Yea!! 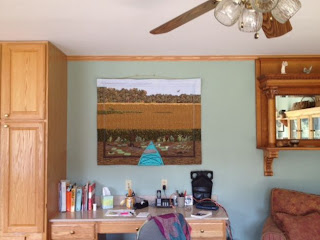 The complete story of this quilt's creation starts here with her photos and fabric selection and creating the landscape, and continues with creating the animals, more detailing and adding the borders are here and here, and finally, photos of the completed quilt.  I'm really grateful to my friend for the inspiration to create such a detailed and exciting quilt. 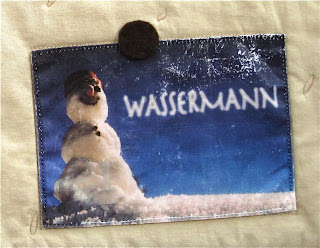 While writing the previous post about my refrigerator quilt, I took advantage of the "interwebs", which didn't exist to such a great extent at the time I made the quilt, to research this postcard from Germany.  It features my last name in the original German spelling.  "Wasser" is the German word for water, pronounced "vah-ser".
Once I was told by a checker at the grocery store that she remembered stories her grandmother told, with a "wassermann" being a scary bogeyman who lives in the river, awaiting the chance to steal away naughty children.  That's not my idea of a fun family heritage!
When I received this card from a friend traveling in Germany, I thought "wassermann" might also be the German word for "snowman".
On the interwebs, I found that a "wassermann" is a male mermaid, aka "merman", and is sometimes used as the symbol for the sign of Aquarius.  No mention of snowmen anywhere.  So maybe the word on this card is a pun, joking that a snowman is made of frozen water.
As I was poking around, I discovered that Robert Schumann wrote a lovely a cappella piece called "Der Wassermann."  In it, a handsome young man joins a group of beautiful maidens dancing in a field and ends up taking one of them back into the river with him to be his bride.  She was, shall we say, rather distressed to be forced to say good-bye to her parents and friends.
The very next day, I bumped into some more family history on the Quilt History list.  There's been an on-going comparison of European vs. American names of patchwork and embroidery styles.  A couple of posts included mention of embroideries from Moravia.  Moravia isn't talked about much these days.  It no longer exists as a country; the lands are now part of the Czech Republic.
I have ancestors way back in my mom's family who were Moravian.  Not to brag or anything, but in the late 1700s, my great-great-great-great-great-grandfather was the rabbi of Brno, then Brünn, capital of Moravia.  His son married the daughter of the so-called "Bavarian hop king", proprietor of a hugely successful beer brewery.  I imagine there must've been some interesting family conversations about that pairing.
It's true that if you explore far enough into any particular topic, you can eventually end up learning about many, many different fields of knowledge.
Posted by Ann at 12:37 AM 0 comments