A couple of days ago, I wrote about the Japanese banners I repaired and mounted.

Here's a photo of the longest banner, happily hanging on its wall.  What a wonderful location!  It looks almost like the banner was made to fit the stairwell - or vice versa. 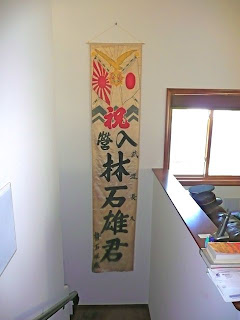 Thanks to the owner for sharing this photo with me.  I'm pretty pleased with the outcome!
Posted by Ann at 2:22 PM 0 comments

A friend of mine, who has done a substantial bit of world travel, asked me if I could repair four World War II banners they had purchased in Japan, and prepare them for hanging.  They are silk, and I decided to back each one with a light-weight silk.  Three are 21"-25" wide and 80" long, and one is very long, 25" wide and 126" long.

This is more than a little off my usual path, so research was called for.  I found great info at this site:
http://militaryantiquesmuseum.com/military_antiques.php

Banners - nobori - have a history of use in war and ceremony.  This website calls them "going off to war" banners:  "These commercially produced colorful banners were pre-printed with military designs. The family and friends would then personalize them with patriotic slogans and/or the soldiers/sailors name." 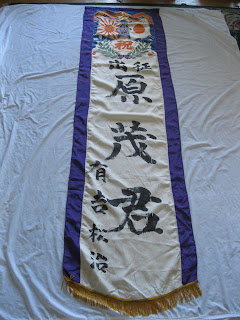 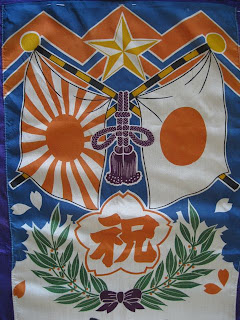 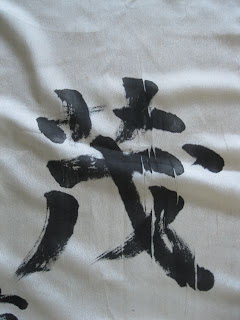 I was confused about to how to deal with fold lines and wrinkles.  It's generally recommended that vintage fabrics be steamed rather than submit them to the dry, contact heat of an iron.  This is because the fibers tend to be dry and perhaps brittle, simply due to their age, and are therefore much more prone to scorching.  Also, they will get even drier and therefore weaker over the long haul.

But I was concerned about the steam's effect on the inked inscriptions.  Would the ink be color fast?  Years and years ago, I took a couple of classes in sumi-e, Japanese brush painting, and from that I knew that the inks were definitely water based.

So I wrote to the military antiques website, inquiring about how they remove the wrinkles.  I had already poked around on the site, and found it to be a super impressive collection of items from all eras and all localities.  It's a great resource for anyone with a love of military memorabilia.  I got a response the very next day, saying that they iron from the reverse with a very low heat, and recommended that I do a small test at the beginning.  It's still adding dry heat, but at least I knew that it didn't generally create any short-term problems.  Thanks!

I found that I could add a little water to the bad wrinkles in un-inked areas.  (And when the job was done, I pressed from the back, with the new lining acting as a press cloth, again with a cool iron.  I found that a little steam did not disturb the inks, and hopefully added in a bit of moisture to balance out the pressing.)

Then, on to the mending.

A couple of the banners had areas of wear and outright tears.  I backed those areas with silk, and couch stitched the worn spots to those patches to give them extra support.  I changed between black and cream Here's the back view, patch fabric basted on. 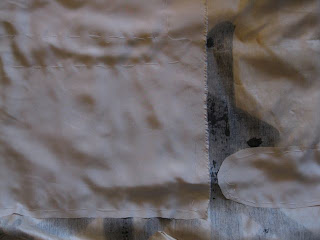 Here are before and after pix of some of those areas. 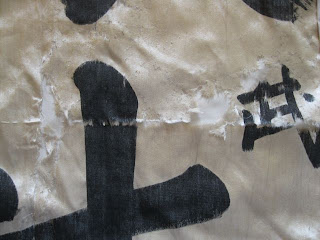 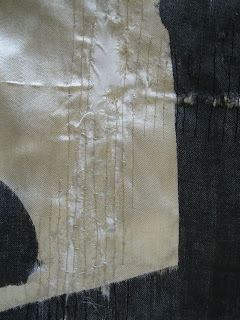 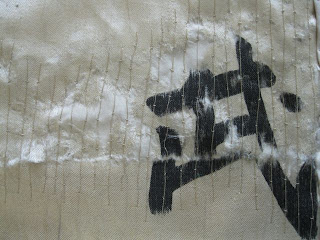 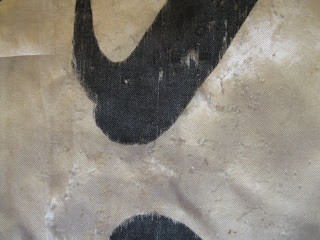 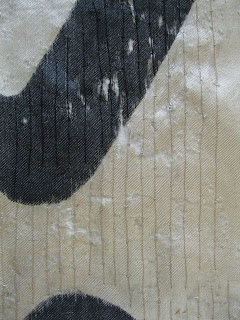 Then, I add the silk backing.  Three of the banners had seamed-on, solid-color borders.  I decided to stitch into those seam allowances to give hanging support where there are several layers of fabric.  I stitched with a tiny zig-zag stitch.  There are little horizontal stitches on the front, within the width of the seam allowances.  These are perpendicular to the direction of the hanging to give safer support.  They are about 1/2" apart. 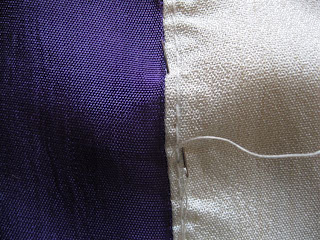 Along the edges, I turned the silk backing edge inside, and stitched the edge closed, making what is sometimes called a knife edge. 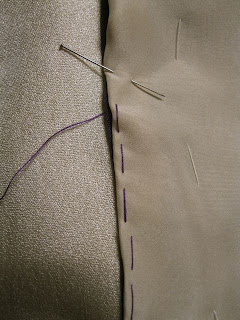 The longest banner had no added borders with handy seam allowances for hanging, and also was in the worst condition.  I decided to bring the backing around to the front as a binding.  Again, I made stitches perpendicular to the hanging direction and less likely to pull through the weak fabrics.  This time, though, I stitched in a wider zig-zag, and made two columns of stitches. 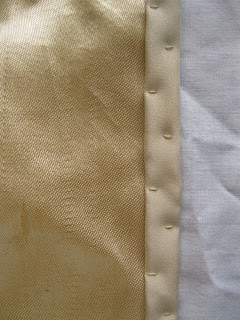 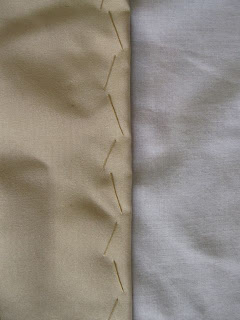 The hanging sleeve at the top had some tears in it, so I brought the backing fabric around to the front, covering the worn sleeve, and creating a new one. 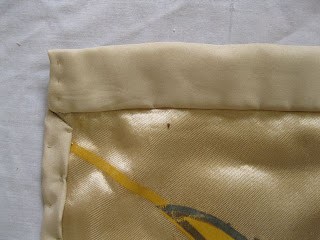 And here are the completed banners (in addition to the one at the beginning of this post). 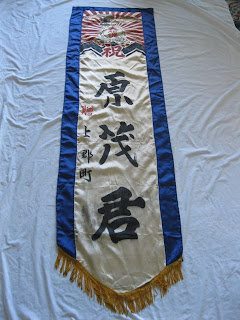 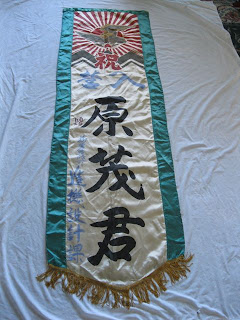 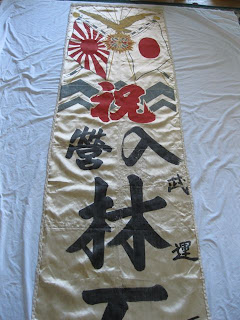 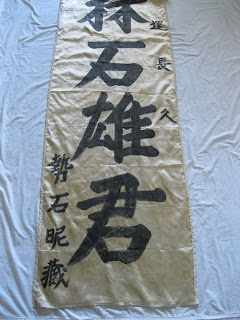 And, here's a photo of one of the finished banners in its new location.