I'm writing about this quilt to illustrate that point that all quilts can be loved and be very important.  This quilt, which came to me for repair, is what's often called a "utility quilt".  That means, it's a quilt that was made from available scraps and made for use and warmth.  A utility quilt is considered the other end of the spectrum from a "museum-quality quilt".  A utility quilt usually isn't described in terms of spectacular design or workmanship.  On top of that, this quilt was in pretty bad shape, open seams plus loads of missing fabric and loads of missing batting, especially from the red gingham fabrics on the reverse and around the edges.
The special thing about this quilt is that it is owned by the grandson of the maker.  So even though its market value doesn't make investing in the repair a "sound" financial decision, the quilt does have tons of emotional value.

Sadly, I got so involved in looking for fabrics, that I absent-mindedly forgot to take pictures before I started the sewing.  But I wanted to post about it anyhow, so here are the pictures of the completed quilt. 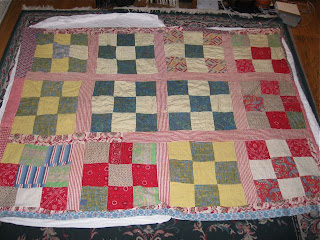 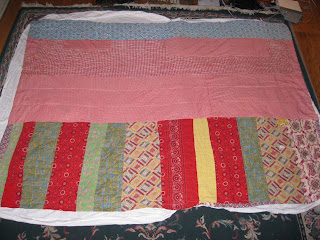 The quilt had been repaired before along one edge, with a turquoise print.  What I did was to baste in lots of batting to the center and many of the edges, and then patch.  I had a hunk of vintage red gingham, which was nice to use because it's cotton and not a blend like today's ginghams.  It was a different size check, but I decided to use it on the basis of the fiber content.  I also used a vintage print on some of the border areas - not at all a match, but it worked into the look and feel of the other fabrics quite nicely.  I also used a bit of an old pyjama pants that I picked up at an estate sale at some point. 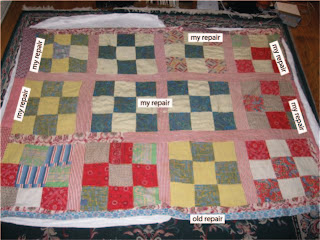 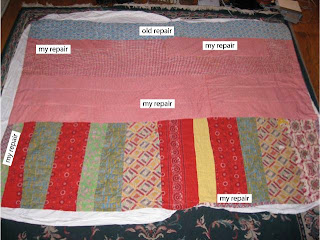 I think it was made in the late 1960s, with several fabrics dating in the 1950s.  So now it's about 50 years old.  Sure, it still has weak fabrics, but it once again can be handled and enjoyed.  The repairs not only make it look whole again, but also stabilize and support the remaining original fabrics. 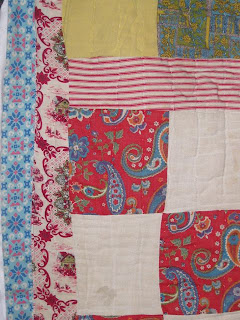 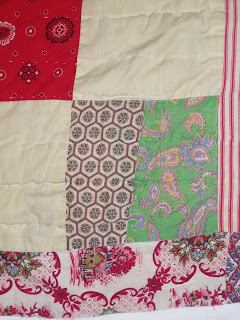