This quilt just begged to be recorded for posterity.  It's not an uncommon pattern, a basic 6-pointed star.  It's a very nice rendition, stars surrounded by lighter colored baby blocks shapes.  But as you will see, its real claim to fame is its fine condition and its fine collection of 19th century fabrics. 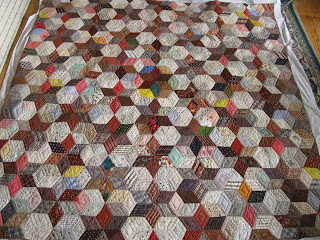 I patched 6 diamonds.  A few of the browns have weakened and split: 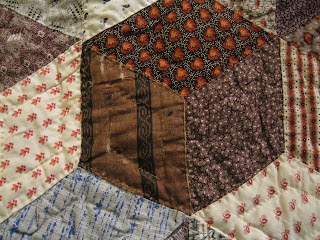 Here are a few brown fabrics being auditioned: 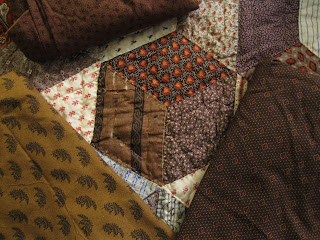 Sometimes, part of the audition process is to look around at other fabrics in the quilt, even though they are still intact.  It's well nigh impossible to exactly match such an old fabric, but not impossible to find something that has the same look and feel and general coloration. 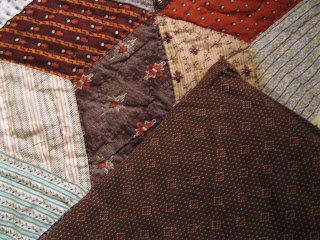 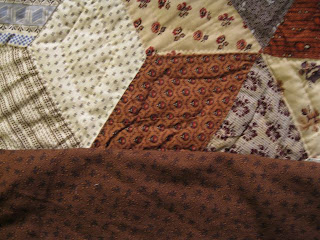 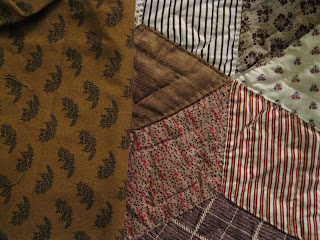 Here's the fabric I ended up choosing for this place: 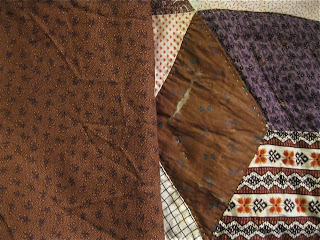 First step is to trace the diamond to be patched: Next step is to pin the pattern to the fabric and cut, including a turn under allowance: 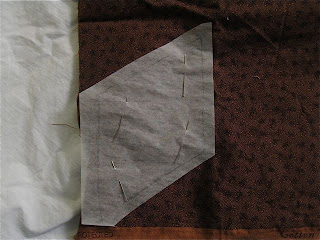 Here's the patching fabric pinned on, first edge turned under and ready to sew: 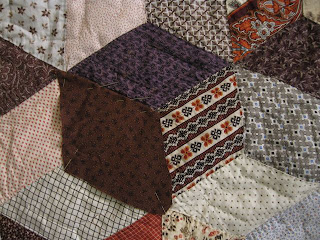 I slip the knot inside the turn under, so it is in the new fabric, not the antique fabric: 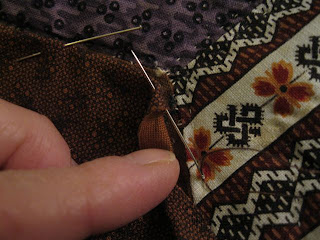 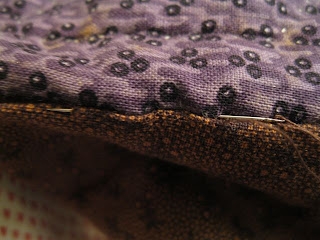 Once the patch is all appliquéd, then I quilt.  I don't quilt all the way through to the back, if the original stitches are still there.  The re-quilting can just go into the batting.
I try to match the sizing and spacing of the original quilting. Honestly, my hand quilting on my own projects has improved by leaps and bounds over the years because of learning how to make anything from 10 stitches per inch to 4 stitches per inch, and anything from precision stitching to the long-short-long-long-short sort of stitching. 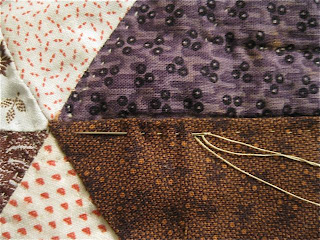 This quilt had one row of quilting right inside the seam lines, and also a smaller diamond inside each piece.  I did another tracing paper diamond for marking the little quilted ones. 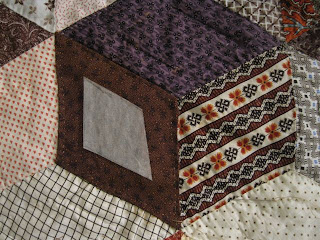 A really helpful little marking tool is a hera.  This is a Japanese tool for fabric marking.  The narrow-edged, rounded end makes a fine, indented line in the fabric.  This keeps the quilt free from the dangers of using any marking material near the old fabrics.  You need to be sitting with a good light to use it, but it's not as tricky as you'd think. 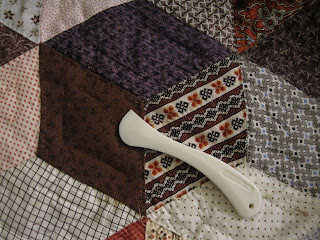 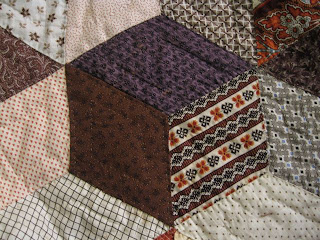 Here's another broken fabric.  Finding a good patch for this fabric was a bit problematical: 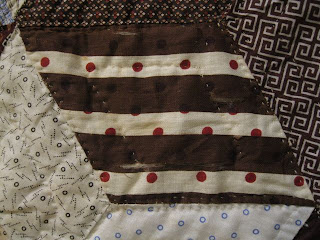 Once again, it was the brown dye that was causing the problem.  But I noticed that it was being used here as a light, in one of the lighter baby block shapes between the darker stars. 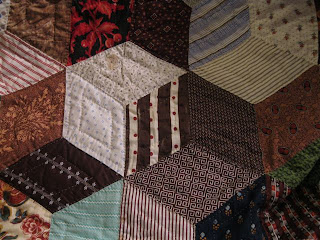 Since I didn't find a suitable brown and white stripe to patch it, I looked at my small brown or black on white prints. 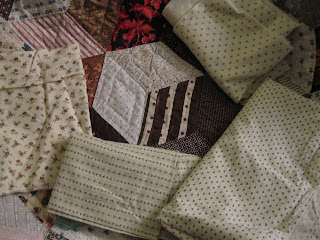 Here's the one I chose, because it so closely resembled another diamond's fabric, and because the background was the best match for the old whites overall: 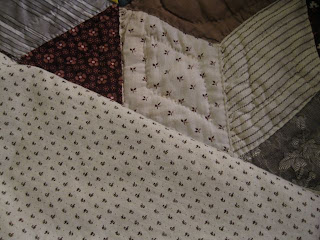 In a second post about this quilt, I'll showcase this gorgeous collection of fabrics!
Posted by Ann at 7:31 PM