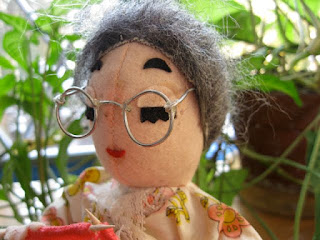 She was rescued from the bottom of a bag of unwanted linens at an estate sale.

I'm guessing, going by the print on her robe, that she was made around 1970 or so.  She has a little bit of an attitude, and I was celebrating the new year by only doing things that I don't have to do, so I decided to spiff her up.

I removed some odd bits of fabric.  She'd been holding a scuzzy piece of a blue fabric with a torn label on it.  Maybe she was supposed to be reading a book.  And she had the remnants of some brown felt around her eyes, which I realized had once been eyeglasses.  I was enough on vacation that I forgot to take a "before" photo, but here are some of the little bits I took off. 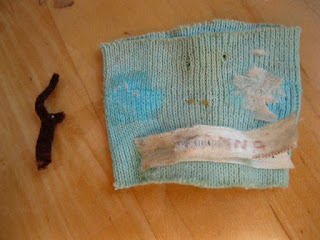 I decided to make her knitting instead of reading.  I pried, i.e. peeled, the blue thing out of her hands.  She only lost one finger in the process.....

I made knitting needles out of toothpicks and a couple of  silver beads.

I discovered that it's possible, at least sometimes, to separate the two layers of a double knit, and then it looks kind of like hand knitting.  I was actually trying to unravel the fabric, and it came apart between the layers instead.  Way easier than what I had been attempting. 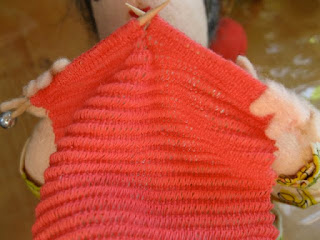 I glued the fabric around the knitting needles and glued her hands around the needles too.  Here is a bird's eye, or doll's eye, view of the knitting. 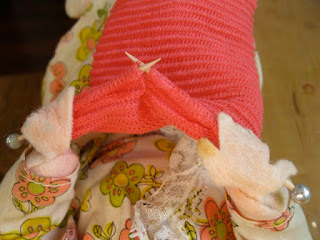 I made a ball of yarn with a circle of fabric wrapped around a bit of batting and attached it to the chair leg.  I did manage to unravel a thread, and used that to connect the knitting needles to the ball of yarn. 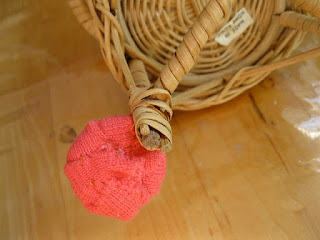 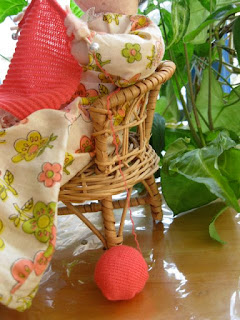 I made glasses with craft wire.  I wrapped two bits around the nozzle of a glue bottle for roundness, and made nose and ear pieces.  It was a bit tricky to glue the earpieces on.  My husband devised this little foam base with a couple of slots cut into it to hold the little wire bits in place while the glue dried.  Just glueing them on straight didn't hold well, so I did it a second time, wrapping the wire around the eyepiece. 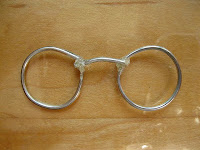 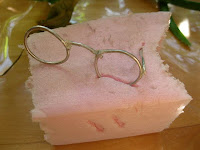 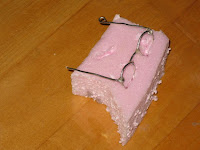 I simply slid the earpieces under her hair. 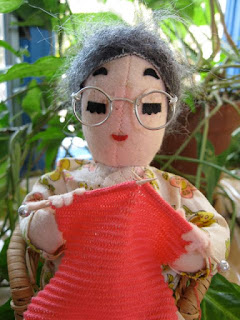 I also patched some rather large holes in a rather unmentionable part of her anatomy by glueing on some new felt.  I won't embarrass her by showing the patches to you, but will just say that she serves as a reminder to all of us to get up occasionally from our needlework so we don't wear out in unmentionable places.

Her name is Blanche.  Here she is, enjoying a sunny winter day in the conservatory. 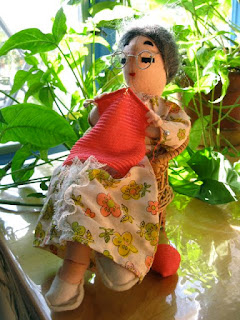