A Quilt From The Heart 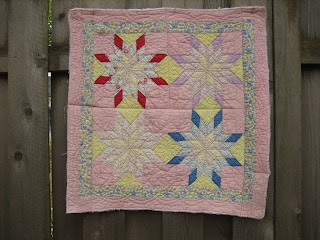 This little quilt carries more heart-felt love than pretty much any other quilt that has come my way.  Writing up its story seems a great way to wish everyone a loving and warm new year.

When the owner and I determined that it was far too damaged for a total repair, I decided to salvage the few remaining (sort of) intact blocks and border sections.  The rest of the quilt was almost literally hanging by a thread, just tatters and empty spaces between them where the batting used to be.  I hasten to say that I virtually never, ever advocate for cutting into quilts, but this one had such a wonderful history, that I decided it deserved a lot more than being relegated to the rag bag.  Here is the story, in the owner's own words.

"When I was about 6 years old, my mother was killed in an auto roll-over.  I had lost my father to TB three years before, and my mother's best friend took me to live with her.

Her mother, whom I called Grandma Kinney, made me a quilt so that I would have it when I grew up, and she was no longer alive.  The maker of the quilt was Louella Kinney, and she had made the quilt for me even before the accident when I went to live with her daughter, Helen.

About a year later, Mrs. Kinney had a stroke in Roswell, NM where we had all lived before the accident.  She could not speak or walk, and was immobile for the next seven years. I think I read the book, "Heidi" far more times then she would liked to have heard, but she was always so kind and had an indomitable spirit in her illness. She lived with us in Monahans, Texas, and was cared for daily by Helen, her husband, Elmer, and what little bit I could do as a child.  My sister took me to live with her in Kansas when she married, and Mrs. Kinney died about a year after I left Texas.

You would think that someone would have been sure that I realized the care it would need in the following years, but after moving to Kansas with my married sister, I lost sight of it.  I don't remember how it resurfaced after many years, but by then I was a young mother with a baby and apparently used the quilt as a beloved but needed household item.  I now live in New Mexico, and while planning to move with my daughter and her family, after my husband's death in 2005, the quilt has resurfaced.  It was high in a cupboad they were cleaning out. It was dirty from neglect, and I was heartbroken that somehow I had allowed that to happen. I could not see putting it in the Goodwill Box until I had someone look at it.  I really don't know where it became so damaged. It truly does live in my heart and my mind as a symbol of her love, and in that realm it is in perfect shape.

Of course you may use my story, and I would be proud to have you use my name. That is sort of a story in itself, as I was named Shirley Ann during the heydey of Shirley Temple.  There are a lot of us over 70s ladies that have that name.  My sister, Pat, began calling me Shannie, and that stuck and matured into the Shan that you know.  My mother's best friend named me as she had no children of her own, when she took me to live with her in Texas directly after I was released from the hospital in Colorado, where my mother died after our tragic car accident that separated our family.

I am so proud for Mrs. Kinney to be remembered in this way.  No wonder people like quilts so much, as they certainly do seem to have little spirits of their own!"
Posted by Ann at 10:18 AM