History Comes to Life on a Quilt - Part 6 - Delving Deeper 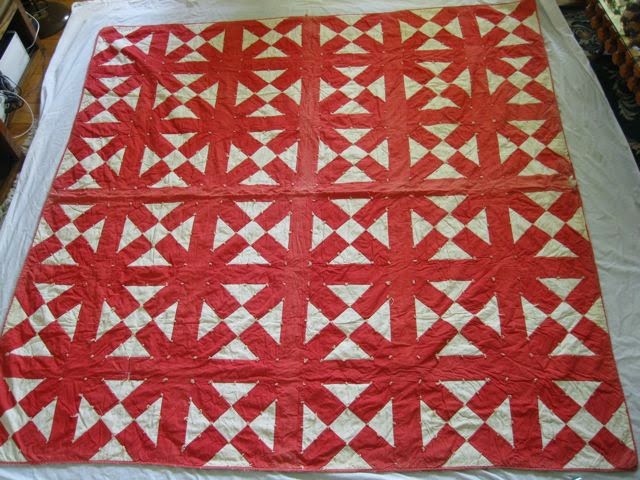 The amazing saga of this quilt continues.  My research into the names inscribed on this quilt showed that it was made between 1897 and 1898 in Melrose, MA.  Reading between the lines of the census records has built up a fascinating glimpse into the era.

The first five chapters of the saga are:
Part 1 - background and start of my search for the details of its history.
Part 2 - how I narrowed down the dates, and some of the interesting family stories.
Part 3 - the story of the Phinney, Dyer, and Hersey families.
Part 4 - general observations on life in the late 1890s.
Part 5  - research summary.
I've written a little aside about the fun of being able to look at original records online.
And, since the quilt did initially come to me for repair, and I did eventually stop reading census forms and do the repair work, and wrote up the techniques and choices involved.
And then I went back to the research, and continued to find lots of great information.
And also, a summary on the occasion of the exhibit about the quilt, December 2018, in Melrose.
After the events, I described the homecoming experience and the exhibits, and wrote about the little quilt I made that was inspired by the historical quilt.  And a set of summaries of the data and stories that brought the quilt to life.  And a very astonishing coincidence with another quilt and a family tree.  I was given a photo of one of the people named on the quilt.

During the height of my research process, I received an order for my quilt repair book (link to the book is on the right, by the way) from a woman who lives in Melrose!

I sent a surprise note tucked into her copy of the book, and we have since talked about the quilt.  She sent me a link to book about Melrose that was written just a few years after the quilt was made - The History of Melrose, County of Middlesex, Massachusetts, by Elbridge H. Goss, published 1902.

Several people who are named on the quilt are mentioned in the book.

I found full names for some people who are on the quilt with just their initials, which allowed me to find them in the census files.  One couple who have been added to the story are Herbert and Christie Chandler.  They were superintendent and matron of the "city poor farm".

Here's the title page of the book, including a photograph and inscription by Mr. Goss himself.  The whole book has been photographed and can be accessed at this link.  There are photos of important buildings, and on page 249 there is a photo and full telling of the military triumphs of one of the people named on the quilt - Nehemiah Mayo Dyer. 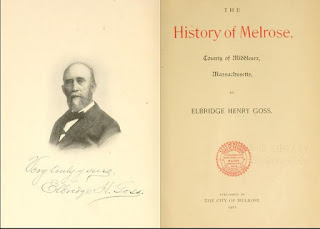 I learned that Melrose was incorporated as a city in 1899.  Perhaps this was the impetus to make the quilt.  The event was commemorated with major celebrations.  I still don't know why this particular group of people were named together on this one quilt though.

from the preface:
....there came to exist a desire on the part of many citizens, that a more thorough and complete  history of our municipality be written. Possibly this wish was stimulated by the near approach of the time when Melrose would become a city, and, of the completion of the first half century since it was incorporated, May 3, 1850. But, be it remembered, the history of our territory reaches back over two and a half centuries.

Early in the year 1898, in accordance with this often expressed wish, Franklin P. Shumway obtained the following names to a petition, requesting that the History of Melrose be written...

So it's pretty obvious that this quilt was made at a time when civic pride was at a high point.

There are 28 names on the petition.  Only one is someone named on the quilt: Fernando C. Taylor.
The result of the petition was a letter written to Mr. Goss.  He included the letter in the book, which is great for me, because it was written by a man named on the quilt, Walter DeHaven Jones.  (Mr. Jones' wife and two children are also on the quilt.)  The letter was written right in the date range that I suspect the quilt was made.  Nice!

April 21, 1898
Dear Sir: — At the Annual Town Meeting you were unanimously invited to write a history of the Town of Melrose, under the following vote :

That the Town invite, and authorize Mr. Elbridge H. Goss to write an illustrated history of the Town of Melrose. That the Town grant him full access to, and the privilege of copying or reproducing any records, maps, illustrations, &c., from the Town records and files, that he may desire, on the condition that he shall not receive any compensation from the Town for his services.

Mr. Goss ends his preface with this warm sentiment:

Melrose is the youngest city in the Commonwealth of Massachusetts. From a small, sparsely settled town, it has grown, during its little more than a half century, to be an influential city of more than thirteen thousand inhabitants. Its history as a municipality has been eminently patriotic, noble and prosperous. Honesty and integrity have characterized its citizens. Its religious and educational interests are well established and liberally sustained. May the coming years be, by God's good guidance, equally blessed with peace, happiness and prosperity.

And I will close this chapter of the saga with a quote (pp. 137-8) I came across while searching for people on the quilt.  I don't know if Mr. Goss intended the quaint humor here, but I do like it.

The next preacher, Rev. Ephraim Wiley, remained three years, from 1814 to 1817, the same salary being voted: "half the amount of $2 a Sabbath be paid at the end of the first six months, and the remainder at the close of the year." A portion of this time he lived in two rooms of the house of Capt. Phineas Sprague, on Main Street, opposite Ell Pond, now occupied by Samuel H. Nowell.

Considering the salary received we are not surprised to learn that Mr. Wiley worked through the week at his trade, that of shoe-making, often with a book open before him studying to prepare for the next Sunday's services. 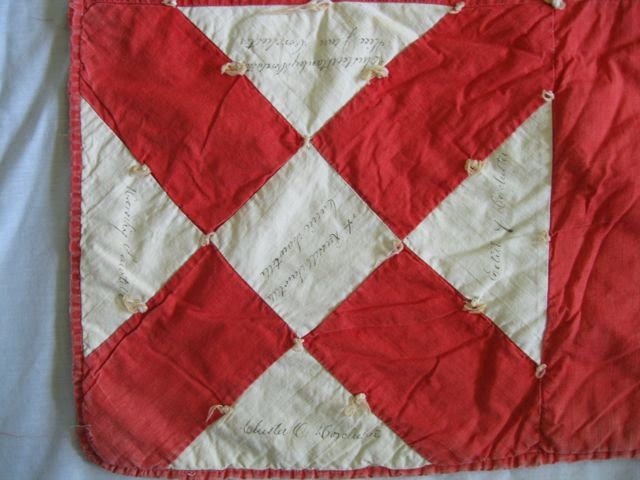