I Always Love a Quilt with a Great Story

Well, I'm of a certain age, which means I'm still totally enchanted and amazed by the ease and extent of all these means of electronic communication.  Here's one of my best experiences so far.

Ruby wrote to me via my blog, and in addition to the question she was asking, mentioned an antique quilt she had restored and finished that had a great story.  And I answered with the title of this post!

Ruby answered with what truly is a great story. 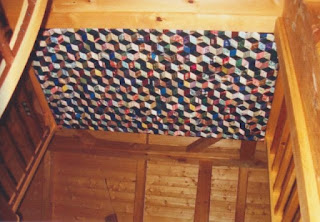 I was raised in a small community called West Mountain, in the southern Adirondacks of New York. Family and friends all lived near one another, giving me a great out-of-the-way place to grow up. I am a third-generation quilter and fourth-generation seamstress. My grandmother, Viola White LaPier, taught me at a very early age how to make crazy quilts. I remember at age five or six going into my uncles’ lumber camp. While she cooked meals for the lumbermen, I would sit next to the wood stove stringing quilt triangles that she had cut out of old, worn wool pants. My great-grandmother, Fanny Newton White, made the family’s clothing by hand, without the aid of a modern-day pattern. She could cut out and construct a dress just by looking at another one. I’m fortunate to have inherited some of those skills.

Noted folklorists George and the late Vaughn Ward started me on the road to becoming a community scholar. I was privileged to take part in many of Vaughn’s workshops and the Summer Field School for Community Scholars sponsored by the New York Folklore Society and Empire State College. Participating in several of Black Crow Network’s Adirondack Women events, I learned how to listen, interview, and present to the public the outstanding lives of local tradition bearers. Being a tradition bearer myself gave me a unique perspective into what was needed to pique the interest of the public.

Because of my background and quilting experience, I was commissioned by William Powell Chamberlin and his wife Dorie to restore and finish an antique quilt top. The quilt top was made by Bill’s great-grandmother, Susan Dunn Powell, in Mercer County, Kentucky. Bill recalls seeing the quilt in the bottom drawer of an old Queen Anne–style cherry desk that was also a family heirloom. It was wrapped in tissue paper, folded, and stored in a flat cardboard box. A note inside the box with the quilt top read, “Made by Susan Dunn Powell, around 1860.” The quilt top became Bill’s when his mother died in 1985.

The quilt top, sewn in a tumbling block pattern, measured 70 inches by 70 inches. It was made of rich black silk, deep-colored brocades, and dark taffetas. Each block was cut by hand and hand-stitched with silk thread at 15–17 stitches per inch, using a method known as English paper piecing.

To restore this quilt top I would need to replace approximately eighty blocks with vintage material. Different types of fabrics fade and wear differently over time, making it necessary to find fabric from the Civil War era. The process would require removing worn blocks and basting in new ones, using a stabilizer on the back of each piece, and hand-sewing them into place.

When I started removing the old blocks, I found the construction I had expected. Most antique quilts are stabilized with paper pieces, cut to shape and hand-sewn into the blocks to keep them from distorting when assembled. Generally, the pieces are cut from discarded paper—whatever a quilter might have at hand. I put aside the snippets of paper and replaced them with a new nonwoven stabilizer. But it wasn’t long before I noticed that old letters, envelopes with three-cent postage, and printed bank statements dating to the 1800s had been used as backing for the blocks. As I restored this particular quilt and read the letters, I began to feel that I was piecing together another type of quilt: a family history quilt. Various names, dates, and stories started coming together from the old quilt. The more I read, the more I learned about Mrs. Rice, John Osborn, the Cleveland Railroad, cod fishing, and Andrew and Joe, to name a few.

Eventually the time came for me to start scouting around to find period fabric, similar in type and color to the fabric in the Dunn Powell quilt. Sometimes it takes months of searching antique shops, flea markets, and auctions to find matching fabrics, but using like materials in the restoration process is vital to the authenticity of the quilt. On one of my trips into the Adirondacks, I stopped at Clen’s Collectables and Antiques in Riparius to look for vintage fabric. What I found was absolutely astounding, particularly as this was the first place I checked. I found a quilt top that someone had started, but never finished. The pattern was the same—tumbling block—only the blocks were cut about a one-quarter inch larger than those I was already working with. The larger-sized blocks would allow me to disassemble, recut, and reuse them in the restored quilt. The fabric appeared to be from the same 1860s era.

I used the same process to take the newly acquired quilt top apart. As I ever-so-gently removed the first pieces of stabilizing paper, I noticed that—like the Dunn Powell quilt—the pieces were parts of a handwritten letter.  The ink color looked familiar, and so did the cursive. I took out a few more pieces of paper, and they also looked familiar. I had seen these letters before! I realized that the letter pieces I was reading were written in the same handwriting, with the same colored ink, as the pieces from the Dunn Powell quilt.

I reexamined the first set of papers, taking a much closer look. Not only did the penmanship and ink match, but the subject matter seemed to follow the same story line as Mrs. Powell’s quilt top. In both quilts, I found matching fabrics and stitching of the same style using silk thread. This was a rare find. The Dunn Powell quilt came from Kentucky, and the one I purchased in Riparius came from a woman in Syracuse, New York, who had gotten it in Missouri.

When I finally finished repairing the quilt, it looked as though it had never been taken apart. The fabrics matched in color and were from the right era. I shamelessly kept the quilt an extra month after completion, so I could do more research on the letters. Before returning it, I scanned several of the letter pieces. Using modern technology, I printed them on muslin and used them to make a star-patterned pillow for the Chamberlins’ enjoyment.

To authenticate my work, I contacted Dee Dadik, a certified appraiser of quilted textiles, in Columbus, Ohio, and asked her to look at photographs of the quilts and give me her opinion on whether they could possibly be made by the same person. Her response: “I don’t know of a way to ‘be certain’ they were made by the same person. All you can do is compare fabrics, read the papers in both tops and the pieces you have to see if any of the printing copy matches.”

After working with the Dunn Powell quilt, it is my conclusion that I was able to restore it with genuine, original quilt pieces made during the same time period and by the same quilter! I’m not sure what I enjoyed more: the restoration process or the research to uncover the story of Susan Dunn Powell’s quilt. The Chamberlins were very pleased with the restored quilt and interested to learn more about their family’s history.

Now isn't that just the best quilt story!  And here's Ruby's bio, so you can get a glimpse of her deep interest in collecting local history.

A quilter for more then fifty years, Ruby L. Marcotte is a traditional artist descended from the Sacandaga Valley Abenakis, French Canadians, and eighteenth-century New England settlers. She was an early board member and assistant director of the Black Crow Network, a nonprofit educational and cultural organization devoted to supporting Adirondack tradition bearers and regional culture, and helped to produce a series of biannual celebrations of womens’ history, lore, and crafts in the Adirondacks.

Here you can see both sides of the quilt, and the pillow Ruby mentions with reproductions of the paper pieces. 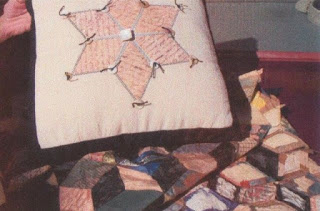 Big thanks to Ruby and to Laurie Longfield and Eileen Condon at the New York Folklore Society for allowing me to share the story here.

Ruby tells me that the Black Crow Network is currently inactive, and suggests the New York Folklore Society as an alternative source for local history programming.  Either way, I'm all for any organization that collects and promotes local history!

To see more paper piecing, you can visit this previous post about a set of English paper pieced blocks I was given.  Ruby's comment there is what began this whole conversation.