This poor little quilt has been "through it".  The quilt is currently owned by the great-granddaughter of the quiltmaker.  She sent me this history:

I couldn't find a name for the block, so I am dubbing it Capital O, at least until I learn otherwise.

She sent these photos of the quilt's condition.  Yes, this is just a top and back, no batting.  It looks to me like someone took it apart to fix it up, and then realized they didn't quite know how to proceed! 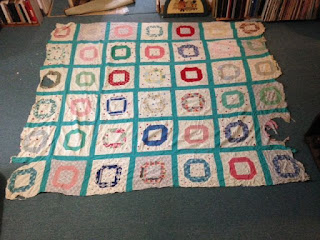 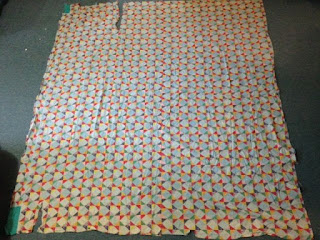 Here's what the owner and I decided to to.

I took off the two significantly damaged sides of the top.  Let me just state here that changing a quilt this much is something that I rarely do.  I try as hard as I can to keep to the original intent.  But this was just tooooooo far gone.  I took off the sashing strips on those sides as well, so the edges would be the same on all four sides.

I marked the portions removed in the photo below.  I also marked a mend I made to the remaining quilt top.  The red plaid fabric of the O in the block at the center bottom was badly torn.  I was able to patch over it with the green O from the right hand side since the background fabric was the same.  I took off the octagon with its center and appliquéd it over the torn red octagon.  I salvaged another piece or two from the edges to patch other spots that needed help. 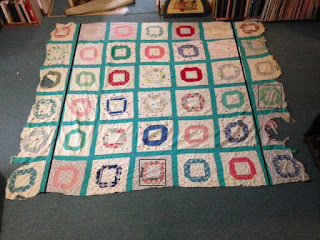 Because I'd made the top smaller, I was able to position it on the back fabric to avoid one of the major rips and also had enough extra fabric to mend the other.

Then the quilt was tied and bound:  I chose a lightweight poly batt instead of a cotton or blend, because the fabrics are so delicate.  For the ties, a size 5 perle cotton in a strong dark pink similar to the original.  And the near-perfect-match binding fabric is a lovely organic cotton found by my husband's eagle eye.  It's from JoAnns, super soft and lovely to work with.  I think it would drape beautifully in clothing, plus be super comfy on the skin.

Here are my great helpers, Maggie and Hanna.  I've known these two for years from the youth theater company I used to costume for.  They love to sew and helped with costumes several times.  They came to help me get the quilt in the frame because I'm nursing a broken foot back to health.  They stayed on and on until we'd set in all the ties which was way more than I'd expected.  And they were laughing and totally enjoying it all the way through.  The best helpers ever! 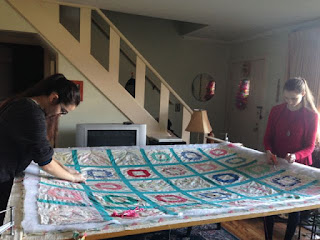 And.....the final appearance.  Quite an incredible makeover, if I do say so myself.  The green O that I moved is in the center bottom row. 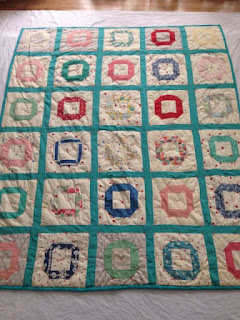 And finally, a few close-ups of some of the fabrics.  Of course!

Here's the O that I moved.  I happen to love the background fabric.  I keep imagining it as a lace, maybe a lace curtain would be nice. 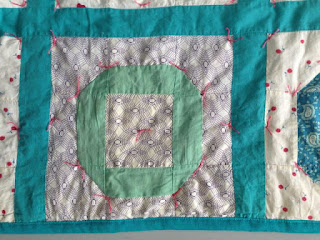 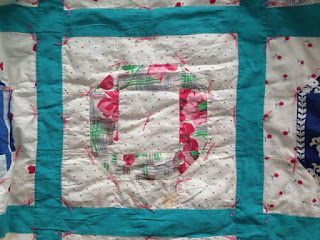 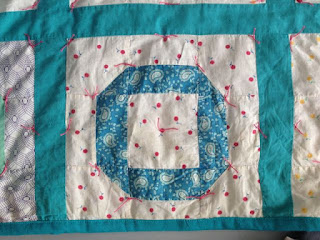 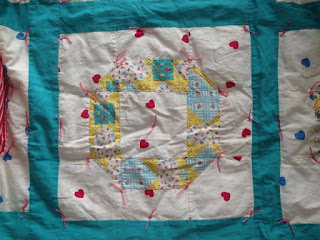 After a long time, I've figured out that the text probably used to say "Home is where the heart is." 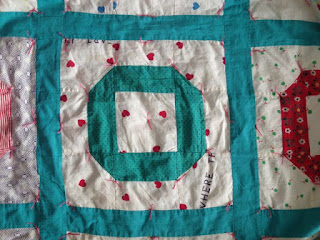 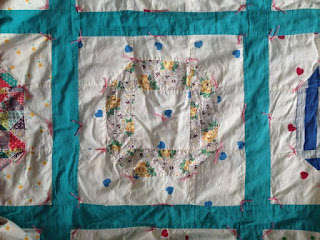 And here are two prints from the borders that I removed. 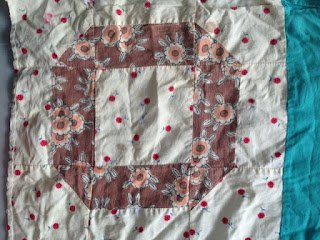 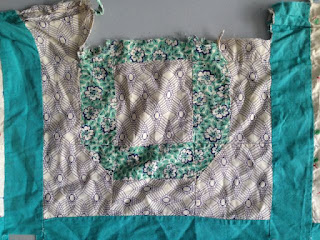 This is cheater cloth (printed, faux patchwork) on the back, spool of thread for scale. 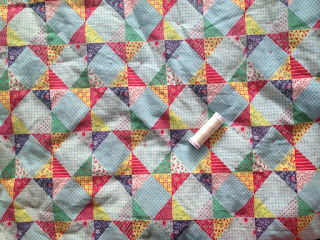 Welcome back to the world, little quilt!  Keeping heirlooms alive is one of the great joys of repairing quilts!