Wow.  This quilt is just wow.  It's one of the wow-iest quilts I've worked on.  I love it. 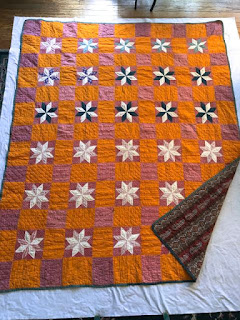 Here's how the owner came to acquire it:

I don’t collect quilts or even know how to use a sewing machine. I just really liked the quilt colors and patterns.....when I saw it in an antique mall in Columbia, MO (I honestly love Orange as a color). So much so, that after leaving without it I regretted it. The following Monday I was back at work and just called them on a whim and made them an offer and they agreed to ship it to me.

Well, what a fun story!  I love that the quilt kept calling to him from half way across the country and waited for him to call the dealer!

The owner sent me some photos and I gave him a general assessment.  Then he said:

I am astonished that it would be from the 1870s. I figured it was sewed in the 1960s or 70s because of the paisley pattern on the inside. But when I looked at it closer, it did seem to be hand sewn because the stitching was very uneven. I think I would like to proceed to get on your waiting list to fix this quilt. I would like for my new family (my daughter just turned 9 months old!) to be able to use this quilt going forward.

We had plenty of history to talk about.  And plenty of decisions to make about how to treat the quilt. First of all, though paisley was indeed very popular in the 1960s and 70s, it's an ancient design, going even further back than the 19th century when this quilt was made.  An exhibit at the International Quilt Museum in Lincoln, NE, called "Old World Quilts" shows pieces documenting paisley designs on palampores from India that made their way into European markets in the 1700s.  (An amazing exhibit, well-worth visiting online.)

Another topic is the dye technologies that created the wonderful color combinations on this quilt.

The orange is called antimony orange.  It's known popularly today as cheddar, but that is a modern nickname for it.  The color was developed in the 1820s, among the first mineral-based dyestuffs, as opposed to the earlier plant-based dyes.  It became really popular in the 1840s and onward.  In and of itself, it can't be used to give a precise date for the quilt.

The pink is also an important color of this era.  The prints were called double pinks because they were made with several shades of the same dye.  Double pinks were also popular for many, many decades.  Earlier on, they tend to be softer pinks that become deeper and brighter in the later 1800s.  The modern nickname for them is raspberry pink. 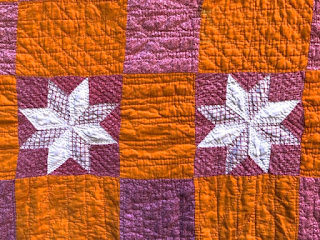 The teal blue of the binding and some of the star points is also a color seen often in this era. 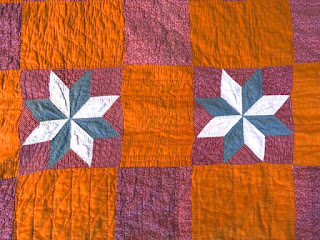 What's especially great about this quilt is that these fabrics on the top are in perfect condition, with only a little bit of wear on the binding. 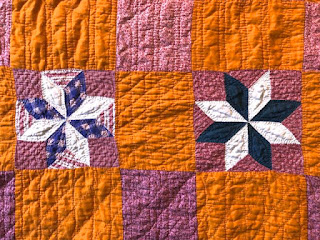 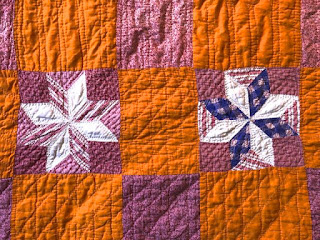 The paisley fabric on the back is where there is damage that needed to be remedied.  This fabric has an interesting dye story as well.  Both brown and black dyes of the 19th century are well-known for having been manufactured with the use of mordants, substances that help the dyestuffs adhere to the fabric.  Some mordants are metallic salts which have, over time, destroyed the fibers in those areas, leaving holes where the design elements used to be.  This is variously called drop-out, popping, or in a sillier mood, Swiss cheese fabric.

Here's an area of the quilt where the paisley fabric is still in good shape.  Isn't it gorgeous? 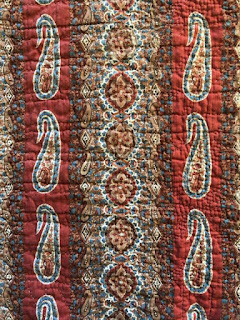 This is a process that cannot be fully stopped because the damage is being caused by the dye that was absorbed during the manufacture of the fabric.  So, I had to recommend against using the quilt, as the owner had hoped to do.  But I also told him that it’s definitely a beauty and would delight many quilt collectors, so he decided it was totally worth trying to preserve it as best as possible.  I wholeheartedly agree!

Here are some photos of the popping damage.

1. One of the design elements that is intact.  Note the dark brown scallops on the edge of this oval. 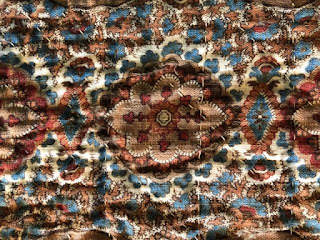 2.  Another of the same design element where the dark brown dye is eating away the fabric and batting is starting to show. 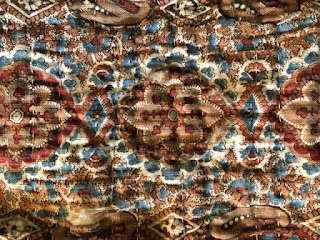 3. And another spot, where that dark brown dye has eaten the whole border and the center of the oval is being held on by the quilting stitches only. 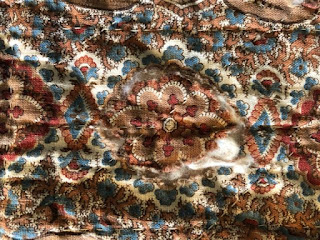 4.  Here, you can see the same process happening on the small paisleys and diamonds. 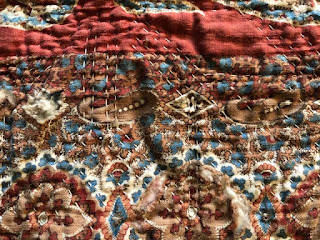 5. This area is one of the worst.  There are a few of these long, thin areas of severe damage, so I’m guessing that the quilt was folded for a long time and that exacerbated the disintegration process. 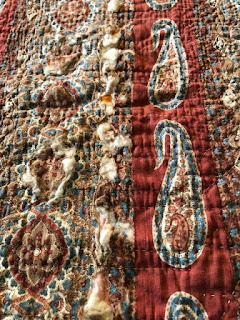 Next topic - deciding how to protect the damaged areas.

In the end, the owner and I agreed on combining two of the options:  I used the couching stitch to secure fabric bits and batting to the quilt.  And it the worst areas, where there was no longer enough fabric to couch into, I applied a tan polyester netting.  In this way, as much of the original backing as possible is totally visible.  I'm really happy with this solution, because for both myself and the owner, that backing fabric, and the interaction of that fabric with the brilliant front, is a big part of the appeal of the quilt.

Here are two photos of the couching stitches holding down raw edges of the designs. 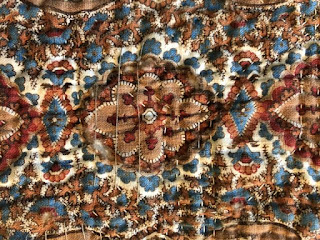 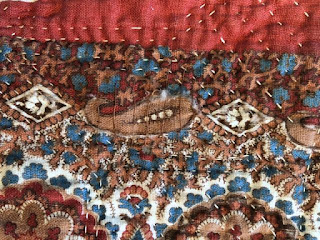 And this is a photo of the netting applied to one of the long areas with the worst condition.  The two pins are pointing to the little running stitches that I used to apply the netting.  They are relatively widely spaced so that the thread goes under enough fabric to not stress and break individual fibers. 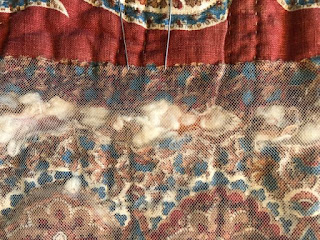 Here's the whole back, after all the stitching was finished.  You can see that the netting has lightened the look of the fabric a bit, but I think it's not too distracting. 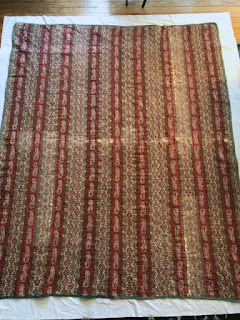 And finally, I did a bit of stitching along the worn binding, using a herringbone stitch back and forth across the edge. 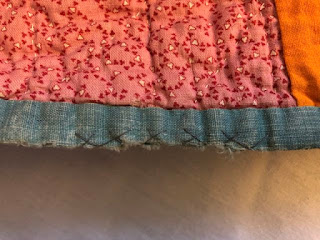 I absolutely enjoyed the fabrics and design of this quilt, and could still be staring and smiling at it if I hadn't have had the responsibility of sending it back to its owner!