Quilting in the Fen

My current art quilt project is a major one.  I've been working on this quilt for longer than I'd like to admit.  So this rather lengthy, photo-filled post will serve to bring you up to date with an overview of the steps I've taken so far.  This is a very condensed version of the process.  There were many detailed decision points and adjustments along the way, of course.

A friend of mine from college days, who is a zoologist, asked me to create a quilt depicting the fen in upstate New York where she does her fieldwork.  She sent me many photos that she has taken there.  Here's the overview shot that became the basis for the quilt.  In it, you will see three bog buckmoths, one of the creatures she studies there. 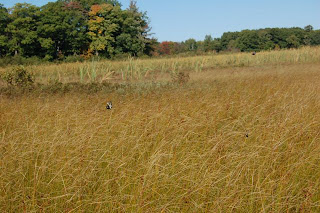 Here is a close-up of one of the little critters.  They are very lovely. 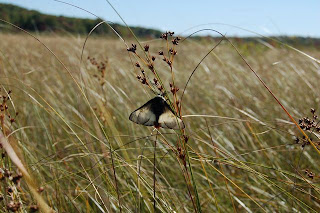 I started envisioning this quilt by cutting and pasting bits from various photos to create an overall layout for the quilt. All along, my friend and I communicated about both the overall concept, and about the details she wanted to be sure I would include. 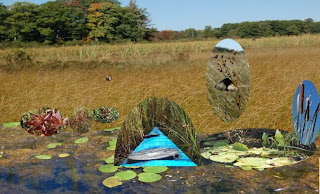 Since I'm making this for someone who knows this place and its inhabitants in great detail, the challenge is to make the quilt as close as possible to botanical and zoological realism.  I started, of course, by collecting fabrics!  I decided to use as a base those prints designed specifically for making landscape quilts.  This would give me lots of texture and detailing without gobs of niggly appliqué or embroidery.  I had a few on hand, and then scoured the internet for others that seemed to have the right colors and flora. 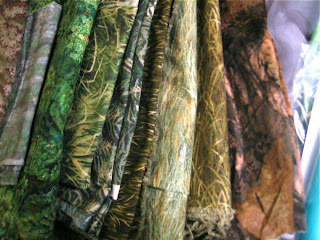 I added in some solid greens for the water lilies, a grey organza for highlights on the water, and, at my friend's request, a lovely turquoise silk charmeuse for the kayak in which she explores the area. 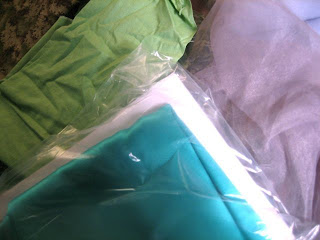 I started with the tree line in the distance, using one base fabric and then trunks and multi-colored leafy bits cut from two other fabrics.  I put iron-on interfacing on all the fabrics before cutting. 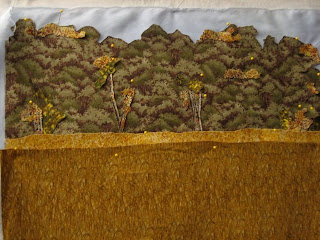 Here is the final plan for the trees.  I only put detail-y bits on the left-hand, closer trees, and added a darker shadow at the base of the right-hand distant trees.  The other fabrics are folded and pinned in approximate positions, just to see how they'll go.... 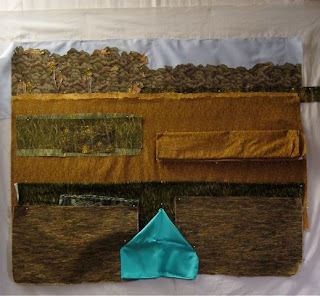 ……and then the beginnings of detailed cutting and pinning into place.  I am appliquéing some strips of the golden grass fabric to itself to try to mask the repeat of the print a bit.  The width of the quilt is constrained by the width of the fabric.  I just couldn't figure a way to piece in more width without doing something that would spoil the flat expanse effect. 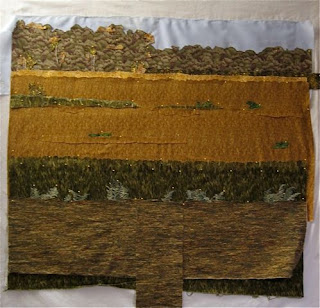 In this next step, I removed some of the green bits from the grassy background.  They pleased my eye alright, but on studying the photos again, I realized it was more realistic to keep that section much simpler.

My friend sent me the names of specific species of critters to add to the quilt.  I found photos of them via the internet (wherever would we be without the internet - well, at the library, I guess, actually).  To get them all in scale, I adjusted the sizes in Illustrator, printed them out, and made copies with tracing paper so I could see them clearly, and pinned them on.  And here they are.  (There's excess fabric at the bottom still.  The quilt will end at the bottom of the triangle/kayak.) 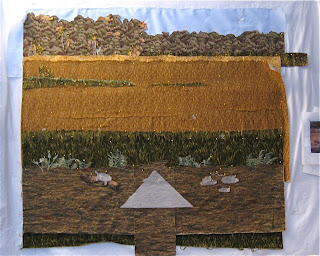 Then I took the bold, for me anyway, step of actually starting to stitch things down.  It's all zig-zag stitched with invisible thread.  Yes, the green leaves are made with two fabrics, a lighter one peeking out over a darker one.  It kind of gives the impression of light tipping the leaves, and also makes the transition from the yellow grasses just a bit more gradual. 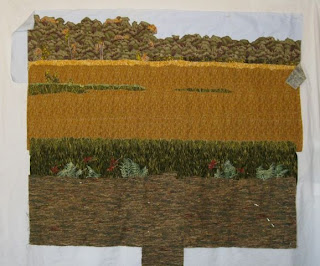 Then I went on with adding detailing at the water's edge.  Ferns, cattails, red leaves, and the prow of the kayak. 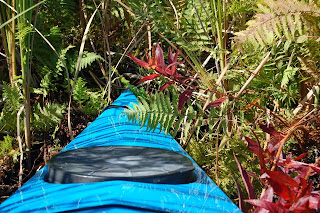 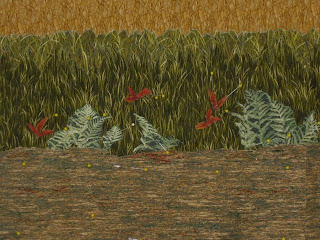 Next, water lilies and highlights on the mucky water….. 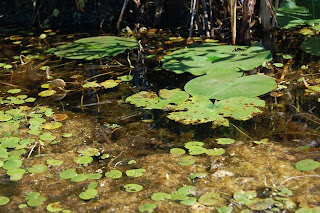 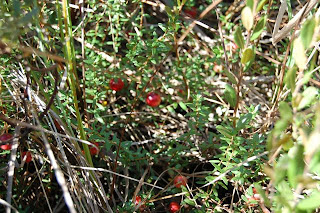 ….and the kayak and some more varieties of grassy plants.  There also are some branches floating along, one of which will eventually have the turtle sitting on it. 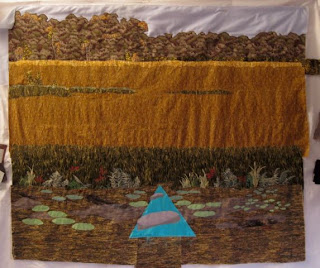 Next step: the animals.  You'll meet them in the next post.