It's always a treat when I get something to repair that I really love looking at.  This dress is one of those treats.  It's a "little black dress" with extra flair - beaded trim at the neckline and the one asymmetrical pocket.

Quite a few of the beads were missing, especially those decorating the pocket.  I bought a tube of matching bugle beads - how lovely to have such a basic bead so that I could find an exact match.

Here's the step-by-step of the bead replacement.  First, I sketched in lines with chalk, so I could easily erase and re-do if needed (which I did need to do in a couple of places).  I use a "Chaco Liner".  There was some original thread left here and there that helped guide my sketching.  Next, I basted over the chalk lines, since they are not permanent and would probably rub off before I could get to beading them all.  I didn't knot either end of the basting, just left long dangling ends. 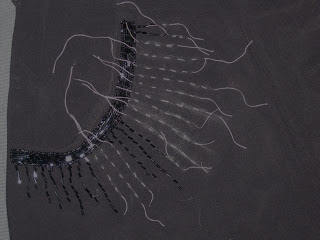 This is the same kind of beading I did while replacing beads on this wedding dress.  First, bring the needle up at the start of the beading line.  Pick up two beads and slide them into place.  Make a backstitch, going down at the end of the new beads, and coming up between them. 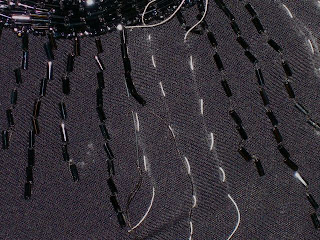 Next, put the needle through the second of the two new beads.  And continue to repeat the process by picking up two more beads, backstitching, and threading through the last bead. 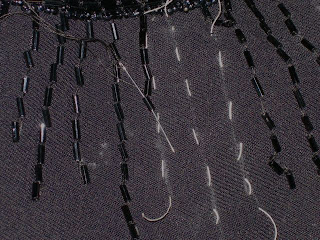 Here's the completed look of the pocket embellishment.  I replaced missing beads at the neckline in the same way. 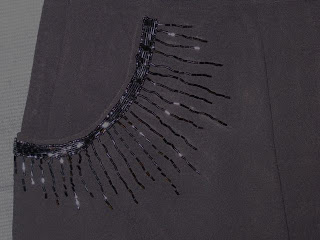 One other little fix I made was to replace the silver and poorly stitched hook and bar.  I used a black hook and bar and, after two tries, got it to hide much better. 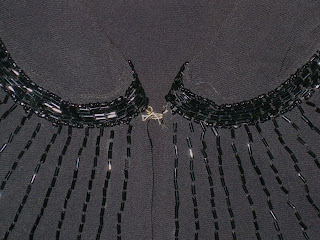 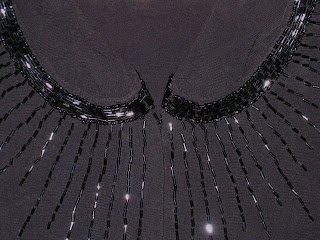 Here's the dress in its entirety.  I really love the way the beads are mostly visible because of their sparkle.  It probably dates to the 1940s.  It's for sale at the Basya Berkman Etsy shop.  If it fit me and if I ever went somewhere that required such a smart-looking outfit, I'd be sorely tempted! 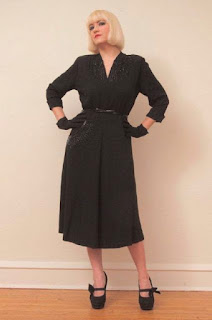 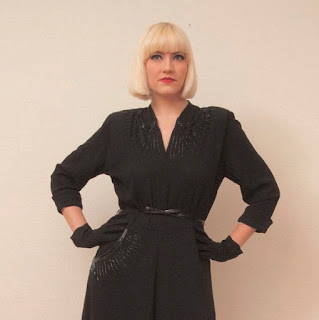