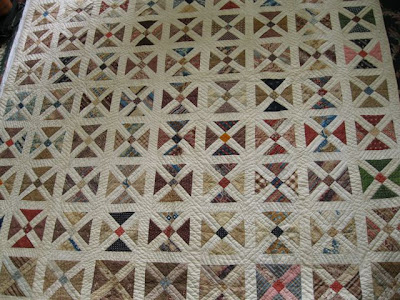 Although it sounds more like someone searching their memory for the right words, that truly is the name of this quilt pattern, "Old Italian Block".

The owner of this quilt had been told that the name is Corn and Beans, but it's really not like any of the blocks by that name in Barbara Brackman's Encyclopedia of Pieced Quilt Patterns.  In the Encyclopedia, Brackman documents the Old Italian Block as a Nancy Cabot pattern.  It sometimes was used for signature quilts, with the name signed on the center square.  Why "Italian"?  I don't know.  Maybe it was inspired by a tiled floor that a quilter saw on her trip to Italy...

There are fabrics here that place it at the middle of the 1800s, with quite a few fabrics from earlier decades.

For one thing, you'll notice that there aren't many "calico" prints, even though those are popularly considered to be the main fabric in antique quilts.  Actually, they didn't come into vogue until later on in the 1800s. 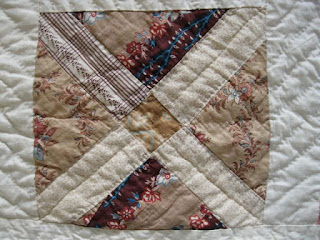 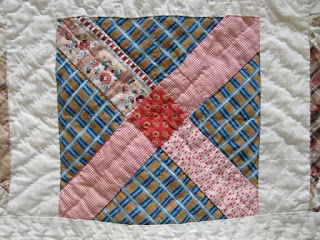 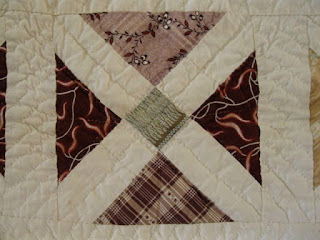 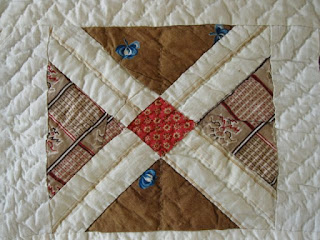 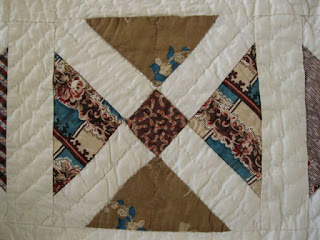 Here are some lovely indigo blue prints.  They show how color fast indigo dye is, not a bit of fading.  You'll also notice throughout these photos the presence of large floral print stripes, which also help date the quilt to this time period. 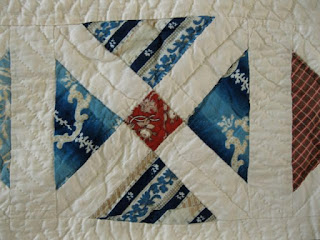 Here are two examples of green print fabric that was popular in this era and beyond.  Green dyes were problematical for a long time.  First, they were done in a two-step process of blue dye plus yellow dye, using mineral and plant materials.  These dyes tended to hold their color better than the first synthetic greens that came along towards the end of the century.  Those often fade to a dull tan, and quite quickly.  It was not until the 20th century that a fast, single step green dye was developed. 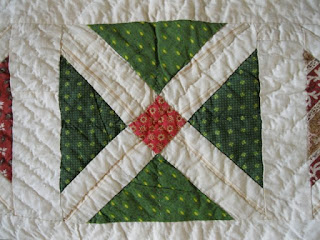 To me, these blue and brown prints with the kind of washed out edges between the colors speak of the 1830s and 40s.  This color combination was popular for quite a few decades around the middle of the century. 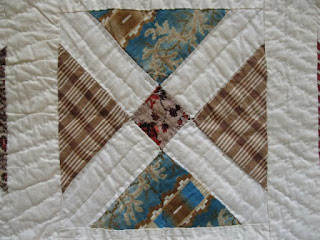 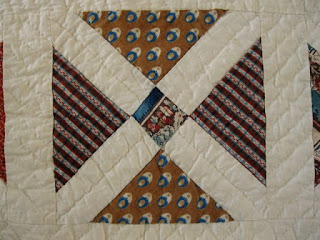 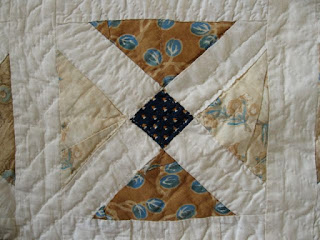 Here's one of those blue and brown prints combined with another popular color combination.  In that one, the indigo and white are joined by a newly invented dye, chrome orange.  This was one of the early mineral dyes (as opposed to plant dyes).  And it is why I date the quilt as I do.  It was developed in the 1830s, and a similar color made with antimony came a bit later. 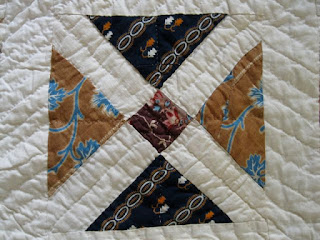 Here's a solid orange as the center square in another block.  I think this quiltmaker was right at the forefront of fabric trends, just like today's quiltmakers like to be. 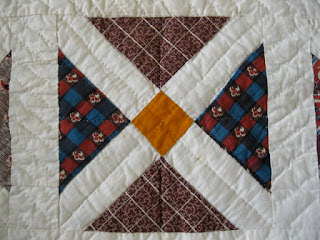 And about the ginghams.  They aren't much help at all with dating quilts, though the colors can indicate changes in available dyes at different periods. 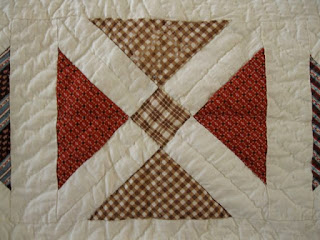 More great information on fabric and quilt construction and design history can be found in Barbara Brackman's book Clues in the Calico.

The story of the conservation work I did on this quilt is posted here.