For those of you, who are like me, totally addicted to Buttons, the Warther Museum is a must-see.  At the very least, it's an idea for what to do with all the button jars and boxes that I can't help myself from buying! 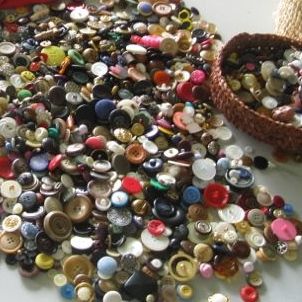 Here's the intro to the Button House section of the museum from the website:

"Freida Warther spent her life button collecting and amassed over 100,000 while creating a unique display of 73,282 buttons on the walls and ceilings of her button house in Dover, OH.

Freida began button collecting at the age of 10 and collected for the next 83 years. She collected about every type of button including: hand-painted ceramic buttons, Goodyear rubber buttons, pearl buttons, brass military buttons, celluloid buttons, calico buttons and even a button from Mrs. Lincoln's Inaugural Dress.

After her children were grown, Freida started laying her buttons out in her own unique designs and quilt patterns. Once the buttons were laid out, she sewed all the buttons onto the boards by hand."

The actual focus of the museum seems to be wood carving:

These two were certainly a creative and interesting couple!  The gallery has photos of both the carved trains and Frieda with her buttons.  I do love buttons!