A 1920s Beaded Velvet Gown - An Absolute Work of Art 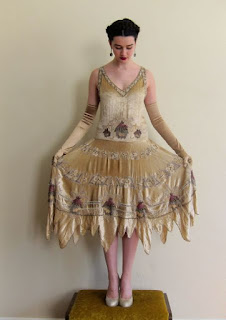 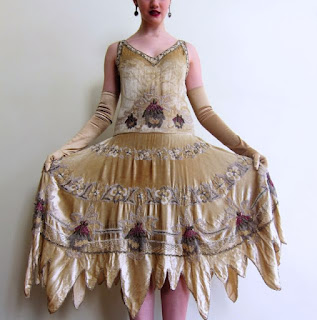 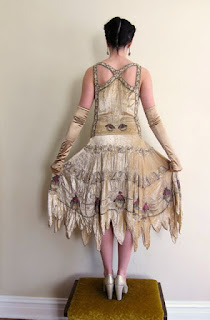 The pedigree of this dress is:
- dates to the 1920s
- made by the Nemser Original Model label, a super high-end designer in New York City
- silk velvet
- heavily, heavily beaded with glass beads
- in near perfect condition, significantly better condition than some of the other Nemser dresses that have appeared online

(For more info on the dress, contact Julia at Basya Berkman Vintage Clothing - basyaberkman@gmail.com - or on Instagram @basyaberkmanvintage, where you can see an adorable little video of Julia's model Megan doing the Charleston.) 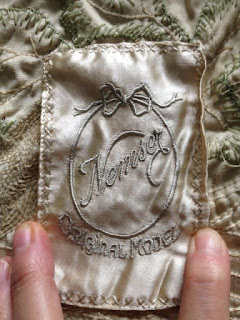 My photos and story are going to relate to the bead-beads-beads.  Such incredible design and workmanship! 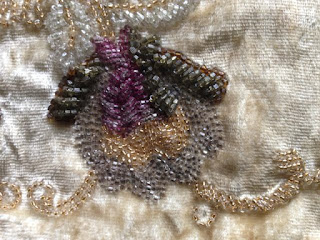 There were missing beads here and there.  For some, I was ecstatic to have a great match.  For others, I had to do quite a bit of searching.  Here's how my work kit finally ended up. One tricky bead was the elongated silver-lined crystal bead on the edges of the hem flaps.  The silver has tarnished over the years, and is now grey.  A modern silver-lined bead was too bright, and I couldn't find grey-lined beads that were a good color match.  At some point in the past, someone had replaced some of these beads with plain, clear beads and I was about to settle for that.  And then, one of those lovely lightbulb moments happened.  I tried stitching the clear beads with a dark grey thread.  Bingo! (original beads below pin) 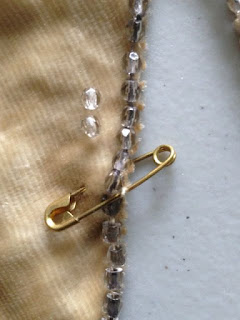 I saw silver-lined beads like these once before when I was replacing missing beads on a wedding dress.  For that, I found some grey-lined seed beads that were a perfect replacement.  And then, I was able to use some more of those same wedding dress beads on this dress, too, in the bands of beading around the skirt.

The other really tricky beads to match were the tiny (3mm) rhinestones.  Similarly, the old silver mounts had tarnished, and the new silver mounts are too shiny.  Also, it seems that the setting mounts are now much deeper than they were in the 1920s.  I finally found a website with flatter mounts, and crystals in the color "black diamond" which sufficiently disguised the shininess of the new mounts.

In this photo (a shoulder strap), you can distinguish the new from the old rhinestone beads by the color of the mounting prongs - silver for new beads, black for original beads. 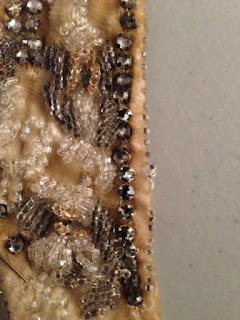 Just imagine how the dress looked when it was new.  All that is grey at this point would be sparkling silver.  The dress would positively glow!

For those of you who have never worked with sew-on stones before, here's how it works.  There are two tiny channels in the mounts, criss-crossing underneath the stones.  It's pretty delicate stitching when the stones are this small! 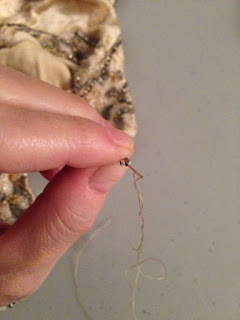 For those of us who love old stitchery, the reverse side that shows construction details is just as fun, if not more so.  Here you can see the reverse of the straps, and of the heaviest beaded band on the skirt. 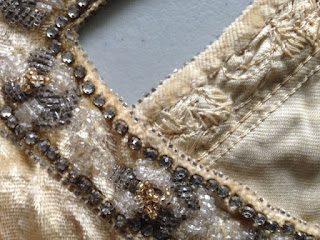 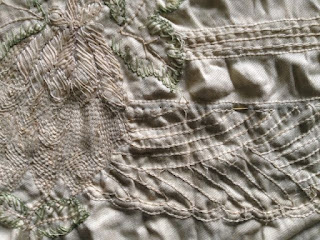 I got really excited about the stitching in this second photo.  The long rows of beads are attached with a chain stitch.  This means they were done with a method call tambour embroidery.  It's still used today for one-of-a-kind couture beading and sequins.  A while ago, I bought myself a tambour hook and hoop, just for fun, but have not yet sat down to experiment with it.  I'm feeling a bit inspired now after restoring this dress!

This photo shows how the beads were applied to give depth to some parts of the beading.  I think the strands of beads are a bit too big for the area, so they end up in arcs rather than lying flat on the fabric.  This photo also shows the wonderfully striated olive green beads. 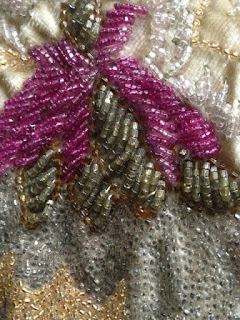 Here are detail shots of the various design elements.  The color palette is rich, the designs are incredibly complex.  There are so many beads that the dress weighs as much as probably 4 or 5 non-beaded dresses.

Those little pearly beads in the last photo aren't actually pearls.  They are hollow, glass bubble beads!  Those were replaced using similar beads from a vintage item that had been too damaged to be saved.

Wouldn't it be so wonderful to know just which elegant gala events this dress has attended?! 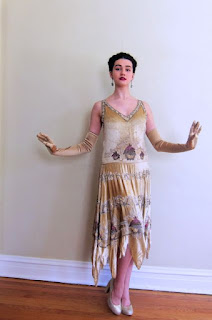