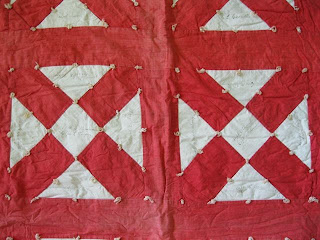 Yesterday, I got back to researching the history of this inscribed quilt.  (Enlarge photo to see the names.  The ink is fading away....)  You can read the results of my research so far in a series of posts called History Comes to Life on a Quilt (see links below).

I've gotten most of my information via the ancestry.com website.  Being able to look at all the original census documents is such a treat!  Well, during my sleuthing yesterday, I came across the most gorgeous handwriting I've ever seen. 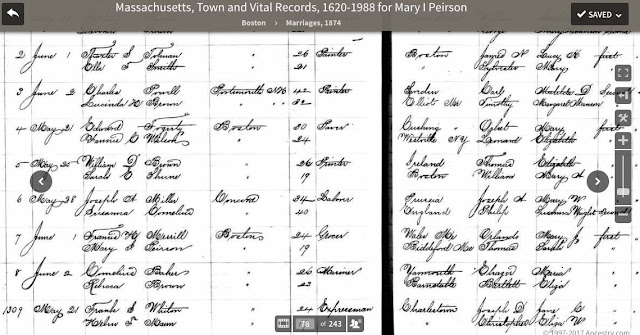 The couple I was looking for is #7, Francis H. Merrill and Mary I. Peirson.  I already knew that Francis was known as Frank, and that he's the Frank H. Merrill on the quilt.  There are many members of the Merrill family on the quilt, including both an Isabel F. Merrill and an Isabel P. Merrill.  I found Isabel F. easily as one of Frank's siblings, but I couldn't find an Isabel P. Merrill on the census records anywhere.  I was finally able to identify her as Frank's wife thanks to a most wonderful librarian who has scoured the town records and sent me many great resources, including a compilation of obituaries for names that appear on the quilt.  Lo and behold, there is a Mary Isabella (!) Peirson Merrill.  Mary went by her middle name, Isabel, and is inscribed on the quilt as Isabel P. Merrill.

These are the twists and turns of research that are at first frustrating and then quite enjoyable!  This time, it was a double enjoyment - one for the problem solved and one for the beauty of the handwriting that solved it.

The legibility and style of the handwriting on all these records varies greatly.  This one is the blue ribbon winner as far as I'm concerned.

Here are all the previous posts:
Part 1 describes the quilt and the initial research.  Part 2 details how I narrowed down the dates, and relates some of the interesting family stories I began finding.  Part 3 tells the story of the Phinney, Dyer, and Hersey families.  Part 4 has general observations on life in the late 1890s.   Part 5 sums up my research.  Part 6 shares the first information from librarians and historians in Melrose.  Since the quilt did initially come to me for repair, and I did eventually stop reading census forms and do the repair work, and wrote up the techniques and choices involved.  And then I went back to the research, and continued to find lots of great information.  After the events, I described the homecoming experience and the exhibits, and wrote about the little quilt I made that was inspired by the historical quilt.  And a set of summaries of the data and stories that brought the quilt to life.