Well, I guess this is my year for really branching out from repairing only quilts.  Last winter, I had my first experience with an ancient tapestry.  In the early spring, I repaired some Japanese silk banners.  And now, I've just completed repairs of a doll.  And not just any doll - a skin diver doll.  And not just your normal, run-of-the-mill skin diver doll (if there is such a thing) - a combo skin diver / shark doll.  Really.
His name is Skins.  He came to me swaddled in a hand towel, not looking too perky.

His problem was that his wet suit was giving way, and some of his plastic pellets were escaping.  His family did some first-aid with band-aids.  And they lightly glued some of the escaped pellets to the back of his head.  Poor guy.  He looks pretty miserable. 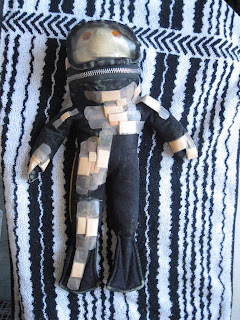 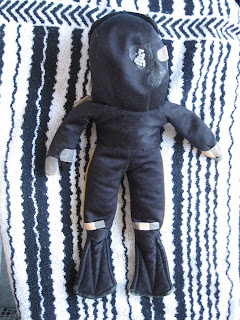 I began by checking out the shark, just to make sure there was no internal problem.  Unzip his "mouth"...... 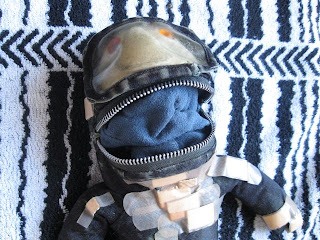 Just grab the tail, and here's the shark.  The shark is not stuffed, but serves as most of the stuffing for Skins' head. 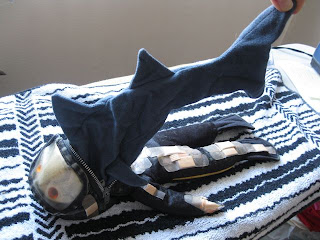 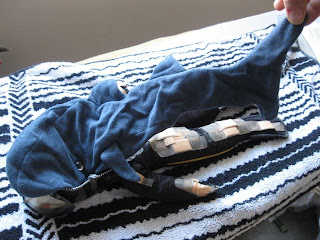 The shark is in fine shape, still attached all around, so there is no escaping pellet problem there.  But really, is this not the most amazing doll you've ever seen?

Then, I removed the band-aids.  Happily, I discovered that in most places the damage was simply that the pile of the fabric had worn away.  The actual structure of the fabric is still in tact and holding in the pellets just fine.  It feels strong enough to continue doing so for some time to come.  There were only 2 places with actual holes. 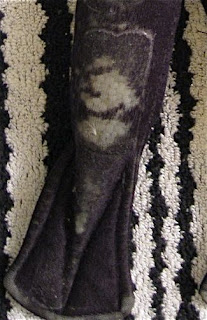 So I began by reinserting the pellets that had been stuck to the back of Skins' head, and patching the holes.  The largest was on the side of his head, shown here with the patch.  He also had a smaller hole on one hand. 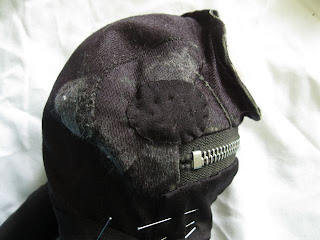 Then, I began building a new suit for him.  I found a really nice black knit fabric with two-way stretch and a bit of a sheen.  I used tracing paper laid on the doll to make very rough pattern pieces, and then cut pieces of fabric quite a bit too large.  I pinned a piece on to the doll, and trimmed away excess fabric as I sewed. 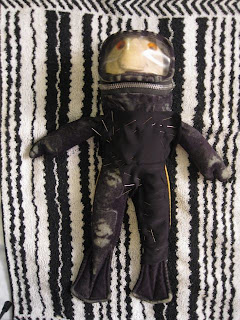 It was kind of a challenge to figure out the sewing order.  I was careful to preserve the stripes down the outside of the legs.  I didn't try to cover the fabric right around the mask, as that would have probably not come out looking too well, and the original fabric, while worn, has no pellets behind it.  As a final touch, I added a bit of machine stitching to reproduce the detailing on his flippers.
Here's Skins in his new wet suit. 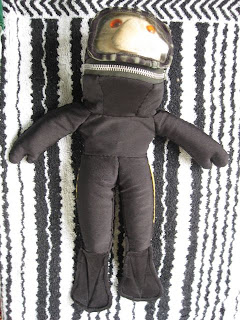 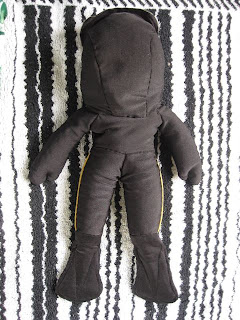 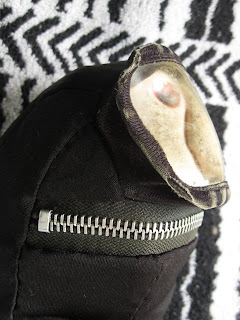 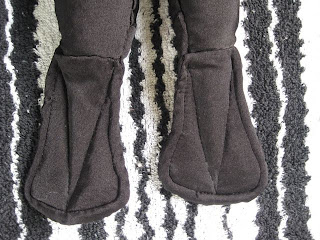 I must say that Skins and I became very well acquainted during this process.  He was a favorite buddy of a now-30-something year old.  Her father decided to fix Skins up as a surprise gift.  Good ol' Skins looks ever so much happier now, don't you think? 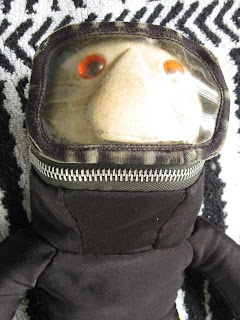