This sweet Rose Wreath quilt is 33 years old.  Some of the appliqués had come loose, a couple of leaves were very ragged, there was a slit in the white background at one edge, and the binding was totally shot, hanging in long dangles. 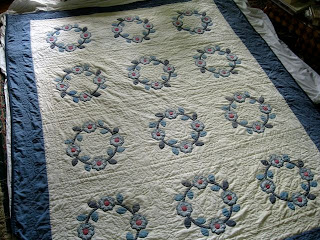 It is a lovely heirloom for the owner.  The blocks were made and signed by her mother, mother-in-law, other women in the family, and close friends.  Several of these people have passed away, so the quilt is now also a memorial to them.

One thing that made this a particularly fun project for me is that it was made in my general neighborhood.  The owner is the daughter-in-law of a quilter, and several of the blocks are signed by people I knew.  Also, being made in 1980, it dates to the era when I learned to quilt.  This is the kind of quilt that got me hooked on quilting!

The other really fun thing is that the owner also has hunks of the original fabrics.  It came with its own quilt repair kit! 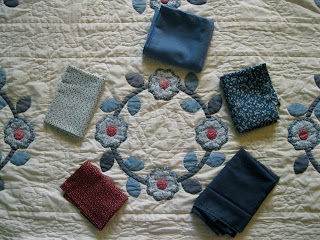 So, finding perfectly matched repair fabrics was pretty easy, except for the fading that's occurred over the years.

You can see how much deeper and brighter the light blue used to be.  We decided it was fine to go ahead and use it on the couple of leaves that needed patching. 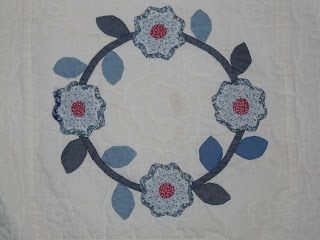 For the binding, we decided to go with the darker blue.  Replacing it with the lighter blue that was originally used would have really emphasized the fading, giving an awkward almost-match.  The dark is substantially darker than the faded version, but we figured it would give a nice, strong edge to the quilt. 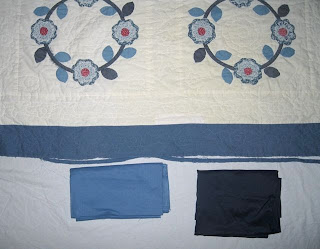 As a side note, when you are replacing binding on a quilt, use the same style, i.e. straight grain or bias, and also use the same kind of the corner treatment. 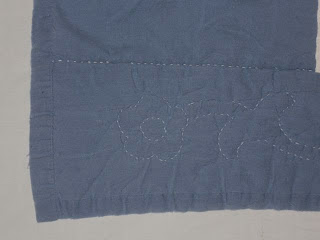 For the white patch, I found a good match in my stash of estate sale fabrics.  Here is the torn area, patched and re-quilted. 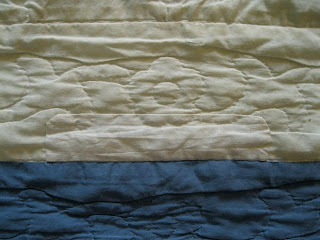 Comparing the quilt's fabrics with the "new", unused remnants gives a really nice sense of what happens to quilt after 33 years of use and love. 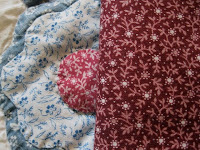 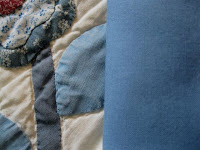 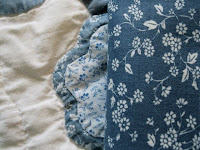 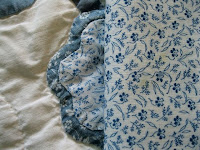 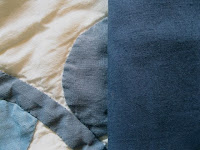