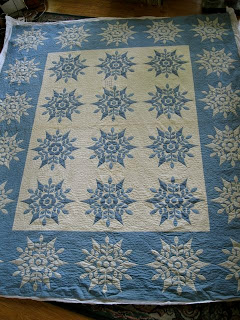 This lovely quilt was made by Grace C. Powell in 1938-9 and given to her granddaughter Elaine on her 16th birthday. The current owner is Grace's great-granddaughter and Elaine's niece.  She has her great-grandmother's very detailed diaries, which are full of references to working on this quilt. 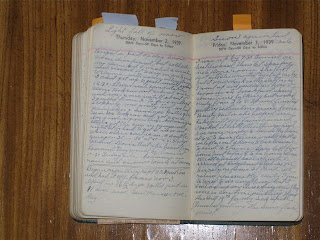 Diary entry on June 14, 1938:
I went to Carson's and looked at quilts and shopped around then to Marshall Fields
where we found same quilt a dollar higher.  .......and finally bot the quilt pattern at
Carson's just before we left for home. ........ I felt well pleased with this. Quilt is appliqué
pattern called Snowflake Block design.   I plan to have it for Elaine's graduation
so gives me plenty of time to finish if all's well.

This post by Nova Scotia Quilts details the pattern history. And here is a reproduction pattern that includes a similar snowflake block.  A very detailed article by Judi Fibush about quilt kits from many eras can be found here.

Grace doesn't mention working on the quilt until September 5, when she writes about cutting out the blocks.  There follow multiple entries that say she is "working on a block."  When the top was completed, the quilt was quilted on a frame in her relative Doris's attic.  She sometimes just kept on quilting and stayed overnight there.

Began quilting on September 20, and had it off frames November 3. I put in 16 1/2 days, Hattie
[her sister, who quilted regularly at her church] put in 11 days, and Mrs. Marcus one day.

She continued working on the quilt, presumably finishing the edges.  They are done with a knife-edge finish.

Grace got it all done well ahead of Elaine's graduation date, and gifted it to Elaine on her 16th birthday in March 1940 instead.  By June 1940 Grace had returned to live with her son in northern Minnesota.  According to her journal, her quilt was entered in the Marshall county fair June 26-27, 1940, in Warren Minnesota where it won first prize.

Grace was very proud of her quilt.  The diary tells us that at one point, she cleaned up the house for some sort of meeting, and mentions putting Elaine's quilt on her own bed.  Then she notes "but nobody came upstairs," sounding rather disappointed.

As you will see, the appliqué and quilting are both masterfully done, so Grace's love of quiltmaking really shows.

The quilt was stored in a trunk, moved twice long distances without opening it, for probably thirty years.  It was discovered in 1996 with a prominent iron scorch mark (no one recalls when this happened), and gifted to the current owner, Grace's great-granddaughter. She likes to cover herself with it on chilly winter days.  She went back to Grace's journals when she started the process of having the quilt repaired, and carefully researched its story. The owner told me that reading the diaries and learning about the quiltmaking process has made the quilt feel like an old friend for her, too.  Lovely!

A description of the repair work I did will come in the next post, part 2.
And there's another chapter to this story, dated September 2020:  Another Snowflake Quilt.
Posted by Ann at 9:30 AM