The previous post told the story of Grace Powell and the quilt she made in the late 1930s.  Here is my part of this quilt's history:  a large patch and an embroidered dedication.

At some point, someone tried to iron the poor quilt!  No one remembers when or how this happened.  This is certainly not a good idea, but became even more troublesome when the iron left a pretty large scorch mark.  The burned fabric on the front flaked away, and on the back the weakened fabric ripped.  The batting in the area fell out. 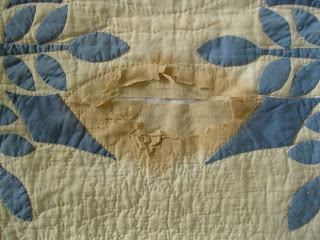 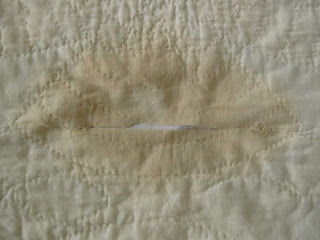 The first step in patching a hole that affects all three layers of a quilt is to patch the back.  This stabilizes the area where fabric is missing.  It's really, really important to work with the quilt smooth and flat so as to not introduce ripples and puckers. 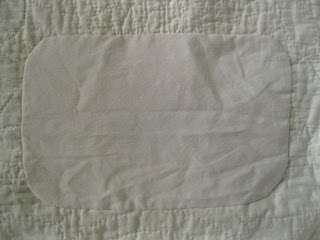 The original batting, having been ironed, was pretty thin, so I made the replacement piece by tearing 100% cotton batting cross-wise.  I started with a piece larger than the hole, and then pulled off little bits around the edge so there is a soft edge that blends in with the surrounding batt.  I basted the new piece of batting in place. 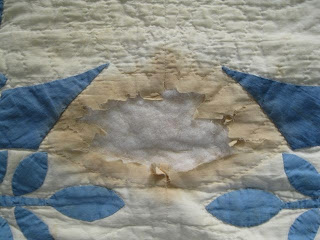 The owner came up with a wonderful idea - she asked me to make the patch into a commemorative label.  She told me what text she wanted, and we discussed different fonts and whether to embroider or use a fabric pen.  I measured the shape of the scorched area, roughly sketched the patch in Illustrator, and experimented with text size and placement.  Then I printed out the final version.

I transferred the text by taping the paper to a window, then taping on the repair fabric, and then tracing the text with pencil.  The window becomes a big light box.  I steady the fabric a tiny bit with my lefthand fingers on either side of the pencil to keep it steadier while I'm writing. 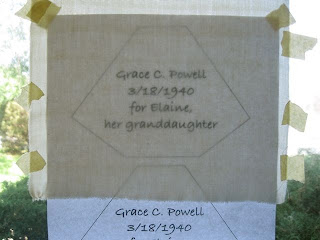 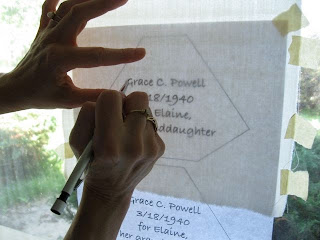 I basted on some fabric strips to make the patch fit in my embroidery hoop, and stitched the letters with sewing thread. 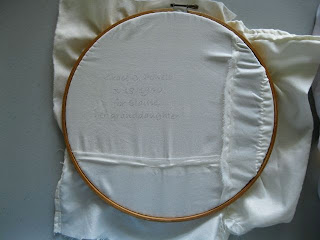 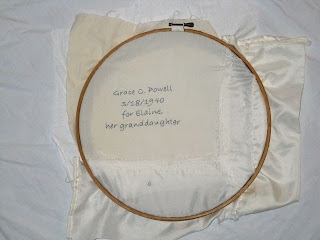 Appliquéing the patch was a little tricky, since it had to snuggle up to the snowflake appliqués, and keep the text centered and horizontal.  I made several attempts at pinning/marking techniques, and procrastinated a lot until I got courageous enough to actually trim the patch and sew it on.  I trimmed it as I went around instead of all at once, just in case I needed a little leeway fabric at some point. 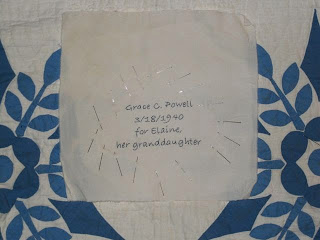 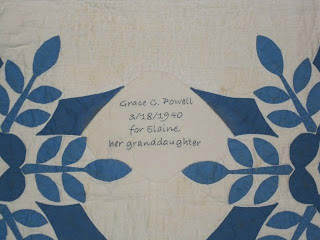 Finally, I quilted the patch, but not through the embroidery, so it would be easier to read.  I quilted a little bit from the back as well, to help keep the new batting in place. 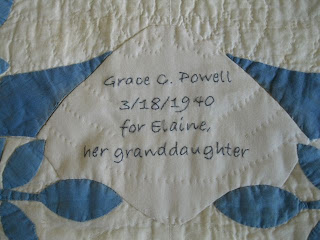 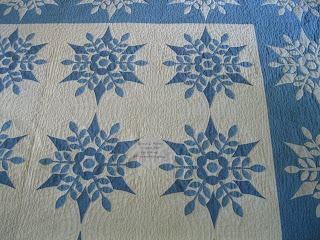 This is a lovely pattern, and the quilt has such an unusually well-documented story.  I loved being part of its tale.
Posted by Ann at 10:27 AM